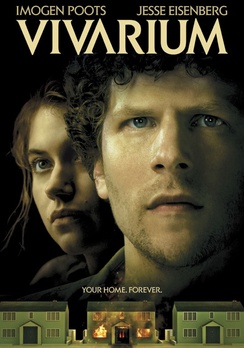 Let's face it. Timing is everything when it comes to success.

Movies like Bloodshot and I Still Believe were dealt a mortal blow when the box office all but closed up the week after they were released. Instead of being able to pad their box office total and increase awareness about them, they were "one and done" and left to fend for their lives at home entertainment.

Vivarium's timing was a bit luckier.

A young couple looking to buy their first house gets more than they bargain for when they check out a model home. After their real estate agent makes a quick getaway, Tom and Gemma find themselves trapped in a labyrinthine maze of identical homes. With no way out, the young couple is forced to live together in the model home and confront things both within and beyond their control.

To say that Vivarium is more poignant given the global pandemic raging around the globe would be correct, but it would also be a disservice to the performances turned in by Jesse Eisenberg and Imogen Poots. The film would be D.O.A. without their measured takes on the slow burn of losing your mind without human interaction.

Just how good are they? Well, thanks to the outbreak of Covid-19, most of us have become experts in self-isolation and can identify with Tom and Gemma's situation. No, we haven't been tricked into a de facto prison, but the parallels are quite striking.

From a Sci-Fi standpoint, fans of the genre will see echos of Cube and In the Mouth of Madness in Vivarium. Of course, themes of isolation are rampant in many forms of film, but seldom have they risen to the levels here thanks to Eisenberg and Poots.

When you're tasked with having to carry a film by yourself or with another, it's a tall order, but when it's successful, the results can be epic. There is very little action in the movie, so the brunt of the film is truly on the two leads' shoulders and they answer the call brilliantly.

After the requisite sequence of testing their boundaries and finally accepting their fate, Tom and Gemma are presented with a twist. This young couple is presented with a child and tasked to raise it with the promise of release. Naturally, they are skeptical and much like the opening credits sequence, they find themselves in the role of the unsuspecting birds having to raise the cuckoo that has invaded their nest.

The film touches upon some interesting themes about raising the young of others and the true breaking point of the human spirit, but to discuss further would risk encroaching upon spoiler territory. Of course, I always contend that the true measure of any film is its ability to spur conversation long after the last frame has played.

To that end, Vivarium is an unqualified success as I was compelled to immediately seek out others to discuss the twists and turns in the movie. It is a film that will linger with you for a few days and that's never a bad thing.

As we find ourselves sheltering in place for several more weeks or months, Vivarium will take on even more meaning. So, it truly proves that sometimes a bit of misfortune could suddenly make a movie even more relevant. The rush of people buying and renting Contagion is proof that in these crazy times, we tend to reach for the familiar and to that end Vivarium is very much in line with the shelter in place times we live.

Vivarium is now available on Blu-ray and DVD.