Review: 'Krypton' goes with a bang and a whimper 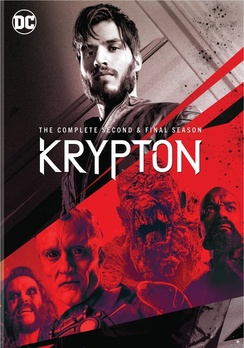 You know the old Neil Young lyric. "It's better to burn out than to fade away."

The gist of it is that it's better to live life to its fullest and die young than to live long and become irrelevant. At least that's how rock stars interpret it and their high mortality rate at a young age would seem to augment their reasoning. Of course, perhaps ironically, Niel Young is 74 years old, but no one would ever claim that he was irrelevant.

Ever since the debut of serialized TV, the same sort of adage has also been debated in network circles. Is it better for a TV series to be contained to a small number of episodes or to let it run its course aimlessly before finally being put out of its misery? See Lost.

Enter Krypton. The loudest complaint among fans and critics is that the networks have become overzealous in their ax-dropping and it has brought many wonderful shows to a premature end. It seems that in today's "what have you done for me lately?" status quo, networks are less excited about letting shows slowly develop an audience and expand their horizons.

If you're not a ratings bonanza out of the box, then it's the guillotine for you. Interestingly, Krypton debuted to a strong audience in its first season, but the critical response was much more tepid. These reactions were flipped in season two when audiences started to flee just as critics were praising the show's efforts.

In Season Two, the battle for Krypton rages with Zod fully in control and looking to rebuild the planet in his likeness. Superman's ancestor Seg-El and a ragtag group of resistance fighters unite in a desire to restore hope to their beleaguered planet.

I found myself in line with the critics on this show. While I watched Season One on the SyFy channel, I had pretty much abandoned it after the first season finale. It wasn't until this review copy came in that I went back to Krypton.

I am so glad that I did.

Right off the top, the Season Two establishes a more action-centric storyline with the resistance and the introduction of the alien bounty hunter Lobo. And as The Mandalorian just proved, bounty hunters are all the rage these days.

I just have to interject a small tangent here that Lobo is hands-down my favorite character from Krypton and it saddens me to no end that with Krypton's cancellation following Season Two, the powers that be also made the decision not to pursue a planned Lobo spinoff.

Of course, with the success of The Mandalorian anything is possible as the networks love to steal from each other. Also, as a DC property, Krypton and its characters could always show up on the DC Universe streaming service further down the road. What I'm saying is that never give up hope because anything is possible.

The second season of Krypton is one where the show really started to spread its wings and live up to the potential on which it debuted. When you hear about a series set on Superman's homeworld before he was born, you are immediately interested. Of course, the monotony of the first season drove away all of the casual fans and they never came back.

That is too bad because the second season was full of potential moving forward. If you bolted on the show as I did, I recommend that you pick up Season Two and see everything that you had hoped the first season would be. I have a feeling that the show will pop up somewhere down the line, so why not be ready for it when it does? Trust me, you won't be disappointed.

Own Krypton: The Complete Second & Final Season on Blu-ray and DVD now.