Review: 'The Farewell' will say hello to awards season 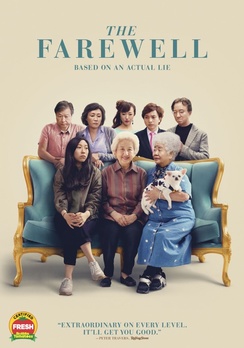 Independent film distributor A24 is the best in the business currently. It is now what Miramax was in its heyday. In other words, it specializes in selecting special films for distribution that more than likely will be a force to be reckoned with come awards season, but regardless, their films will move their audience and leave them changed forever.

A24 doesn't produce their own films, rather they prefer to hand-select their movies from the vast ocean of selections at film festivals that are fully produced, simply waiting for distribution. The competition at these highest echelons is fierce, but without a doubt, A24 has the highest batting average of any indie out there these days and that is incredibly impressive.

Of course, I have been effusive with my praise for A24 over the years, so if you're a long-time reader, this doesn't come as any surprise to you. What might intrigue you somewhat is just how on-target their process is. For example, take the film that I am reviewing today, The Farewell, which is mostly in Mandarin with subtitles with a largely unrecognizable cast, but it could be the most endearing movie of the year and should find itself with a Best Picture nomination soon.

It shouldn't work, but it does. That speaks volumes for the dogged effort that everyone at A24 puts into their process and if I am ever fortunate to meet the geniuses behind this success, you better believe that drinks will be on me.

The Farewell is a movie about the clash of cultures and the bond of blood when the matriarch of a Chinese family is diagnosed with lung cancer and given a prognosis of mere weeks to live. The family decides to withhold the truth from the ailing woman and secretly concoct a wedding so that everyone can come together and celebrate her life without having to pass along the bad news.

There is so much going against The Farewell that it's almost a miracle that it works as well as it does. The driving force behind its success is yet another A-list performance from rapper turned actress Awkwafina. In her previous roles in big-budget films such as Crazy Rich Asians and Ocean's 8, she has relied on her funny bone to carry her performance, but she displays a full arsenal of acting talent in this movie that bodes extremely well for her future.

I had not been introduced to her music or acting prowess before she stole every scene that she was in during those movies, but it was evident that she was a massive talent waiting to explode. Ironically, her explosion comes in the smallest, most intimate film that she has taken on. It is also the first movie in which she is clearly taking the lead and carrying the weight of its success among a relatively unknown cast.

Awkwafina's characters that I had previously met were both loud and outgoing. They were comical and full of life, while Billi is a much more reserved character going through an incredibly tough period in her life. She is conflicted internally but is challenged by the fact that she can't tell anyone except for her parents about her disagreement with the family's decision.

Instead of her loud trademark rambunctiousness, Billi is a quiet, emotional being and communicates her conflict through subtle movements and emotions. Don't get me wrong, Awkwafina is still able to display her wild personality at times, but it's much more reserved and I wouldn't be shocked at all to see her sneak away with an Oscar nomination for her performance.

The other interesting thing about the film is that it is "based on a true lie" which not only makes for a killer tagline but forces you to research the story behind writer-director Lulu Wang's similar circumstance. I certainly don't want to give anything about the third act away, but it was very easy to make connections between The Farewell and another awards season darling The Big Sick. They are both based on true stories, involve the clash between culture and blood, and instigate further reading on the subject, which extends the movie beyond its 98-minute running time.

The Farewell is one of those films that will stick with you for many days afterward. For me, that's the true measure of any great movie, will you still be contemplating it a week later? Or, like so many films today, will it simply join an ever-growing pile of single-serving movies that you dispose of before the credits stop rolling? The Farewell is a rare gem in today's blockbuster-driven landscape and just the latest example that you should be seeking out all of the films being distributed by A24. You will not be disappointed.

The Farewell is now available on Blu-ray and DVD.