Review: Did '47 Meters Down: Uncaged' jump the shark? 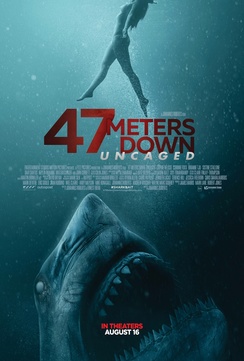 Thanks to Happy Days, the term "jumping the shark" has been in the popular culture lexicon for over 42 years. Basically, it means taking something so far beyond the realm of belief that it becomes a signal that the end is nigh.

Whether it's Fonzie ski jumping over a shark or four nubile teens scuba diving with great whites, the sentiment remains true today as it was in 1977. As much as we all love a good shark movie, it might be time to let this fad go belly up.

Around the same time as Arthur Fonzarelli was jumping his shark, another great white had just terrified the silver screen in the form of Jaws and the great oeuvre or shark movies was born. From classics to the forgettable such as Sharknado, I think it's time to admit that we have a shark problem and it's probably best to simply move on.

47 Meters Down: Uncaged is a sequel in name only to the fairly enjoyable 2017 film 47 Meters Down. The film tells the story of four teen girls who go exploring in underwater Mayan ruins only to encounter a group of deadly great white sharks is hunting them. With their air supply dwindling, the friends must navigate through the labyrinthian caves to escape their own watery hell.

It would be impossible to name all of the shark movies ever made although you could probably name the really good ones with the use of one hand. There's a wide middling pool of mediocrity where films such as The Meg and Deep Blue Sea swim around hoping for even a modicum of respect. Sure, a well-made shark film is a thing of beauty and the original 47 Meters Down certainly aspires to join their ranks, but its sequel is sadly not up to snuff.

The first sign of danger comes in the complete abandonment of the original film's premise. Of course, it's not like they went to great lengths to hide their intentions, they put them right in the title Uncaged.

Instead, the sequel relies more on claustrophobia and peril than the simple terror of being stalked on the bottom of the ocean. In the first film, the terror was magnified by the situation being completely out of the protagonists' hands. In Uncaged, the consequences that they bring upon themselves are of their own doing.

It's hard for me to fell any level of empathy for silly teen girls who could have avoided the situation had they simply not been tempted by someone else's scuba gear lying around. And then, once they found themselves in harm's way, they continually made bad decisions that only exasperated the situation. You know, sort of like telling half-truths to the filmmakers during the casting process.

But hey, it's certainly not the worst shark movie ever made, that mantle will always reside with Jaws: The Revenge. And you thought that beating a dead horse was bad, beating a dead shark is far worse. Just look at the ever-expanding Sharknado franchise. I swear that original film was the result of some sort of screenwriting workshop exercise where you spin a wheel and marry two outlandish concepts simply to work on the mechanics of thinking outside of the box.

Unfortunately, the filmmakers didn't think outside the box, er cage, enough and the result is a derivative movie that doesn't really do much for shark film enthusiasts or escape horror fans. It's really a letdown on all fronts and pretty much begs the question as to why John Corbett would be making this instead of My Big Fat Greek Wedding 3?

I guess a paycheck is a paycheck, but I strongly doubt that this film's meager box office take will cause the studio to scramble to greenlight the next film in the series. Of course, they were going for a different vibe on this one, so perhaps they can always return to their caged roots for the next one.

47 Meters Down: Uncaged is now available on Blu-ray and DVD.