Review: 'The Flash: Season 5' is a family affair 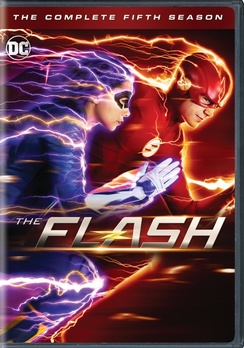 While Arrow was the progenitor of CW's highly successful "Arrowverse" slate of TV shows, there is little debate that The Flash is the show with the most mainstream appeal. Perhaps, it has something to do with the whole being a full-fledged member of the Justice League or having his own set of underoos, but there's no denying the drawing power of The Flash.

It also doesn't hurt that they hit a home run when they cast the show either. Grant Gustin has become a household name thanks to the success of the series and surrounding him with established acting stars such as Danielle Panabaker and Tom Cavanagh is just further proof that a strong cast can lead to TV glory.

The Flash hasn't shied away from exploring the more intriguing limits of Barry Allen's powers such as time travel or the more outlandish villains. I mean they continue to bring King Shark to the small screen and it's not completely ridiculous. No, the strength of The Flash has always been its willingness to embrace its comic book overtures while staying true to the family nature of the character.

This sense of family is never more put to the test than in season five when Barry and Iris come face to face with their grown daughter Nora from the year 2049. All Back to the Future jokes aside (and there are plenty), The Flash: The Complete Fifth Season weaves a compelling tale of familial strife in which the implications of time travel truly resonate with citizens of Central City.

There is a reason that The Flash is the highest-rated show on the CW and that's primarily due to the hard work the showrunners put in to flesh out the characters and storylines. I have to be honest, I was a bit concerned when I read about the season's main story arc.

I mean time travel is tricky at best and the potential for creating series-altering paradoxes is very real. It's surprising that a show with such a robust audience would take such a risk, but then again, it it really? The one thing about The Flash that I have always appreciated is its ability to push the envelope and take the risks that other successful TV shows shy away from.

Despite my trepidation, the folks over at CW knocked the concept out of the park and while the takeaway from the season will be the family dynamics between Barry, Iris and their speedster daughter from the future, the also contributed another iconic supervillain along the way.

Chris Klein is one of those actors that crosses your mind every now and then and you wonder whatever became of them? After his successful run in the American Pie movies, he has tried to break out of his typecasting with so-so success. Most of his films were lousy, but I really enjoyed his work in the Wilfred series.

So, I wasn't completely shocked to see him show up in a series as a recurring character, but I was a bit surprised to see him in the villain role. Talk about casting against type and the thing is that he's really good as Cicada/Orlin Dwyer. The showrunners gave him a meaty backstory and his arc helped to play into the overall dynamic of the season. It was a very satisfying storyline that really meshed well with the family business between Barry, Iris and Nora.

Another strong aspect of season five was the "monster" or "Meta" of the week. Obviously, it's impossible to have Barry Allen simply confront one overriding story arc for 22 episodes, so it's imperative to dip into the rogues' gallery of Flash villains and they did so yet again with great aplomb. We get to revisit classic foils such as King Shark and new baddies such as Gridlock and Block. These Metas of the week are key to making the show interesting and giving the audience a much-needed break from the mythology-laden episodes.

Overall, season five was one of the strongest complete seasons of the series and that is saying something. I was pleasantly surprised that the show seemed to get bette as the season went on, culminating in an emotional climax that you seldom see in comic book TV series. If this season was any indication, The Flash will be with us for many more years to come.

The Flash: The Complete Fifth Season is now available on DVD and Blu-ray.