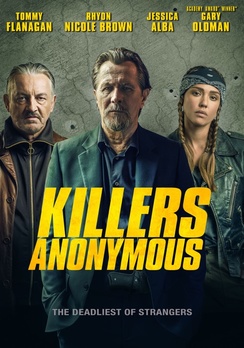 I knew it was too good to be true. But I fell for it, hook, line, and sinker. Let my review be a warning that if you watched the trailer for Killers Anonymous expecting to see Jessica Alba and Gary Oldman trade wits in a master-apprentice contract killer relationship, you will be severely disappointed.

Well, actually, you do get that for the first 10 minutes or so. Then, predictably, Alba exits stage right to whatever corner of mediocrity that the filmmakers found her in. I have to admit that going into the review, my expectations for the film were through the roof. I was curious to see what Jessica Alba was up to lately and the idea of the film is one that certainly piqued my interest.

Unfortunately, I had conjured up something akin to Smokin' Aces in my head, when in reality Killers Anonymous is more like Gigli.

In Killers Anonymous, tensions mount when a member of a support group for hired killers is responsible for the assassination attempt on a U.S. senator. Now, with a massive bounty on the would-be killer's head, it doesn't take long for the seasoned killers to turn on one another to collect on the big prize.

So, the synopsis sounds intriguing, right? This has all the makings of a classic Mexican standoff in a room full of hard-boiled killers, but the execution is amateur hour. They pushed all of their chips to the center of the table with their two bankable stars only to see one killed off in the second scene while the other is basically a glorified cameo that he could have mailed in from his couch with an iPhone.

And the box art and trailer also played up the involvement of Alba and Oldman. Again, I should have taken that as a red flag, but I didn't and I was hoodwinked, but that doesn't mean that you have to be. If you are expecting something as raw and gritty as Reservoir Dogs, you will be disappointed. Even if you're hoping for something as quirky as Free Fire, you won't get that.

No, what you get is a stylistic mishmash of fast-talking and faster pace shoot 'em up clichÃ©s with a stray bad English accent. This is far cry short of Lock, Stock & Two Smoking Barrels but you can kind of see what the filmmakers were aiming for. Unfortunately, the execution and blasÃ© plot machinations leave the audience bored and wishing they had simply rewatched any of the films mentioned above.

I always thought that Gary Oldman was an actor that I could watch in anything, but Killers Anonymous proves mu hypothesis to be false. Honestly, it wasn't him, it's just that they didn't give him anything to work with. Save for the first scene with Jessica Alba, he's pretty much relegated to the role of a glorified lookout. No, really, he basically sits in a chair and watches the events unfold through his binoculars.

I think at some point the filmmakers realized their mistake and they tried to make up for it by making a really bizarre stylistic choice where the person he is calling on the phone sits next to him on the roof, despite being in the other building. You know, on the other line of the phone call. It was just another example of a failed choice that comes back to bite the film in the rear end.

The odd thing is that besides Gary Oldman and Jessica Alba, the film does boast two excellent character actors in Tommy Flanagan and Suki Waterhouse. Unfortunately, much like their more famous acting peers above, they are underutilized despite being game to try and save the train wreck. Tommy, in particular, gives a rather chilling performance that will make his Sons of Anarchy fans something to cheer about.

In the end, Killers Anonymous is billed as a movie that it might aspire to be but never truly reaches. The result is a film that quite frankly is unappealing and struggles to muster enough conviction to carry itself over its own finish line. In true Quentin Tarantino fashion, I was really hoping for a resolution that would leave no one left to reap the spoils. But alas, Killers Anonymous didn't even give me that little consolation prize.

Killers Anonymous is now available on Blu-ray and DVD.