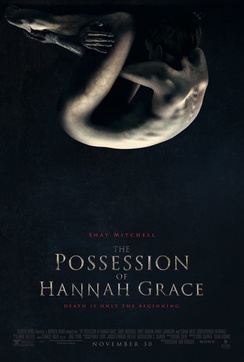 What's a trope or clichÃ©? It's something that occurs so often that it sort of becomes expected of the said thing. Take horror movies for example. During the height of the modern slasher flick (the 1980s), various horror tropes came into vogue such as having sex is a good indicator that would soon be dead and saying something witty like "I'll be back" means that you won't be - save for a bloody corpse during the inevitable reveal.

Many of these clichÃ©s would be poked fun of in the breakout horror hit Scream and a whole new set of horror tropes would come to rule the roost. Several of these feature in The Possession of Hannah Grace, but is that a bad thing? I mean, the reason they have become clichÃ© is that they work.

So, while some might simply dismiss The Possession of Hannah Grace as just another possession movie with too many jump scares, I would argue that these very clichÃ©s serve the film well. Is Hannah Grace a perfect movie? Far from it, but if you're looking for a film to watch on a dark and dreary night that will give you chills, you could do a lot worse.

After a botched exorcism, the corpse of Hannah Grace ends up in Megan's morgue and the former cop starts to experience horrifying visions. Is the dead still possessed by the ruthless demonic force or are the creepy surroundings finally starting to get to Megan?

I was not too familiar with Shay Mitchell, who plays lead Megan, but I'm set to hop onto her bandwagon after watching The Possession of Hannah Grace. The vast majority of the film features Shay as a solitary character set against a drab and dank backdrop and yet she is able to convey a wide range of emotions despite being the only one in the scene.

This is tough in the best of conditions, but it's made even more difficult in a horror film because the protagonist literally stands in for the audience. We have to experience the fear and pain through her eyes and without anyone to emote against, the actor or actress really has to convey these things against a blank canvas. Shay does this magnificently and despite being handicapped by a shaky script at times, she is able to deliver a satisfying performance.

The one cast member that was criminally underutilized in my opinion was Stana Katic. Thanks to her starring role in Castle, she is clearly the most recognizable cast member, but it seems as though her character was shoe-horned into the film simply to satisfy a studio note that said "we need a bit part for a name brand star."

Stana can deliver so much more than what she does her as evidenced by her eight-season run on Castle, but the filmmakers don't ask her to handle any heavy lifting. That said, it was nice to see her face again even if it was only a fleeting glance.

I think The Possession of Hannah Grace is a film that worked better on the page than the screen. There is a lot of interesting subtext in the film and I think director Diederik Van Rooijen makes some rather bland directional decisions. First off, the whole idea of performing an autopsy on a possessed person is intriguing, but instead of exploring that, Diederik opts for another jump scare or three. Also, the whole dying during an exorcism serves as the McGuffin here, but I would postulate that there's a far more compelling tale to be told around the circumstances of Hannah Grace's death.

Just when you think the film is going to zig into this territory when Hannah's father pops up, it zags back into a straight-ahead horror film. As I mentioned, it works fine in this regard, but I do think they missed an opportunity to create a truly original take on the whole possession genre. I mean who doesn't want to see Megan perform an autopsy and realize that the whole possession thing was a coverup for the chronic abuse that her father was unleashing upon her?

But that's not the movie that we get. Instead, we get a more formulaic entry in the whole demon horror genre that we have seen countless times before. Again, it's good for a watch, but if you're aching to see a really well-done film in this genre, I would check out The Exorcist or The Conjuring.

That said, there's something fun about a horror film set in a deserted morgue that really ratchets up the creepy factor. The whole isolationism and feelings of helplessness are magnified and help to save the film from utter failure. Perhaps the best element of the film was the recurring ball of rubber bands that plays into one creepy scene. When Sony sent over this review copy, the film was accompanied by a promotional tchotchke of said ball of rubber bands. On the one hand, it's incredibly cool, but on the other hand, I'm scared to start unraveling the ball.

You just don't know what evil it will unleash. The Possession of Hannah Grace is now available on Blu-ray and DVD.