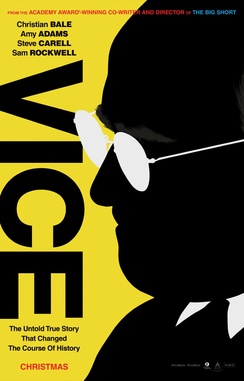 Politics and entertainment are intertwined as ever and that won't change any time soon if the Hollywood Foreign Press Association proves correct. Vice, the true story of former Vice President Dick Cheney, earned the most Golden Globe nominations this morning with six.

But Vice was hardly a runaway favorite. As is often the case with the Golden Globes, there is more confusion, not less, about the awards race when they accounce their nominations. Three films were tied for the next most nominations with five each including critic and fan favorite A Star is Born.

Interestingly, A Star is Born and Vice will only go head-to-head in a single category, Best Director, as the film about music was deemed to be a drama, while the dramatic political film was put in the Comedy or Musical category. I really hope that Dick Cheney doesn't have any big musical numbers in Vice.

On the TV side of things, perennial awards favorites This Is Us was shutout, while newer fare got the coveted nominations. This is the swan song for popular series The Americans and I know that many people will be pulling for it in the Best Drama and Best Actor/Actress categories.

As we did last year, we went ahead and offered our picks in each category. A word of warning though, we only correctly picked 9 out of 26 winners last year, so you might better off flipping a coin to pick your winners.

The 76th Annual Golden Globe Awards ceremony will be broadcast live on NBC on January 6.