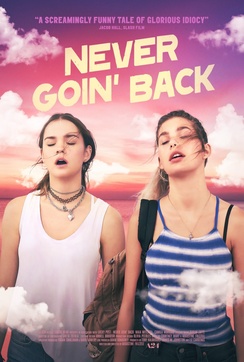 For decades, the stoner genre has been dominated by male stoner duos, but that all changes with this week's Never Goin' Back. Meet Angela & Jessie. These two dynamic dopesters are bringing girl power to the drug culture comedy world and they are a force to be reckoned with.

The two high school dropouts are struggling to make ends meet working as servers in a low-rent diner in Dallas. When they make plans for a beach vacation next week, they need to come up with increasingly wild schemes to make money.

While Seth Rogen and James Franco haven't spawned a series of buddy stoner comedies, their film Pineapple Express stands as the high-water mark of these type of films for the last decade. Never Goin' Back is a fun bookend to Pineapple Express that brings a whole lot of femininity to the stoner culture.

In many ways, you could also draw a through line between Never Goin' Back and Thelma & Louise. They both share a sense of female empowerment and escapism that jabs a middle finger at the current establishment. In many ways, Jessie and Angela are younger versions of their female empowerment role models for a new generation. Just like Thelma & Louise, they are surrounded by hapless men that only get in their way.

First-time writer/director Augustine Frizzell weaves a story that seems contain several allusions to her own upbringing in Texas suburbs. The film has a real feel to it that evokes a lifestyle where the next meal isn't a given. While we generally take our good fortunes for granted, Never Goin' Back is a reminder that there are people out there that struggle to make ends meet on a daily basis.

Much like Clerks, a film that clearly paved the way for films like these, the use of relatively unknown actors adds to the realism of the plot. While I was previously unaware of stars Maia Mitchell and Camila Morrone, they are apparently social media stars and their innate chemistry shines through as things escalate.

If you enjoy coming of age films that liberally sprinkle in drugs and vulgarity, then you will find a new favorite in Never Goin' Back. While it may serve as a cautionary tale for some, the movie is generally harmless fun and proves that women can have their fun and smoke it too.