Review: 'Down a Dark Hall' will spook younger viewers 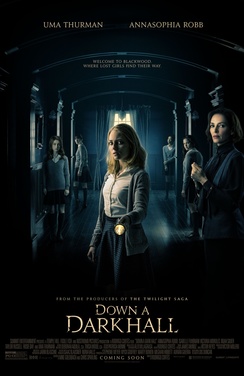 If there's one demographic that is woefully underserved in the market it's horror for tweens. Most horror films worth their salt are rated R for violence, bloody good violence, and more violence.

But, there's a massive audience of tweens who are too young to get into traditional horror films, yet they want their frights and chills as well. Of course, if Hollywood waters down a horror film to get that PG-13 rating, then they risk a backlash from horror enthusiasts of age. It's a real catch-22.

Unfortunately, the simplest solution often ends up with younger fans sneaking into R rated horror films and then having nightmares for months on end. There has to be some sort of middle ground between Goosebumps and Halloween, right?

That's where films such as Down a Dark Hall comes in.

Based on a 1974 novel by the same name, Down a Dark Hall tells the story of five young women who are sent to a mysterious boarding school. While exploring their new digs, the girls discover that things are not as they seem on the surface and that there may be paranormal phenomena at play.

While the film makes some tweaks to the book mostly due to updating the 43-year-old text, the main story remains the same. The changes are negligible and serve to update the horror aspect as things that were scary in the 1970s no longer frighten millennials.

For instance, can you imagine anything more terrifying these days than having your cell phone taken away?

As an adult watching the film, I found myself bored in spots and noting that the producers were the also behind the Twlight, I'm not all that surprised. I'm not the target demographic of this film, but I could definitely see how certain elements would spook the younger set.

My oldest child is only six and I didn't feel that she would be old enough to handle some of the frights in the movie. However, I think that the film will play well for those between 10 and 16 years old. Overall, the film plays like a tween film without being too verbose about the supernatural and might help to serve as a gateway film to more traditional horror fare later in life.

The cast is the driving force of Down a Dark Hall with Uma Thurman and AnnaSophia Robb leading the way. It has been a hot minute since we had seen Uma Thurman in anything, but she's perfectly cast as the shady headmistress. Although, the decision for her to try a French (?) accent with the role is dicey at times and it drew me out of the film with fits of laughter at times.

AnnaSophia Robb is the ageless wonder as she has been playing teens for at least two decades. OK, it only feels that way but the 24-year-old actress is starting to get a bit long in the tooth to play a high schooler, but her inherent naivety is a plus for the film. She makes for a strong protagonist here and one has to think that it won't be long before we see a more traditional horror film pop up on her resume.

If you have tweens and are concerned about the lasting effects of an R rated horror film, then you might want to introduce them to Down a Dark Hall. It will introduce them to plenty of jump scares and supernatural forces that will equip them for a long life of horror film appreciation.

Down a Dark Hall is now available on DVD and Blu-ray.