Review: 'How to Talk to Girls at Parties' is out of this world 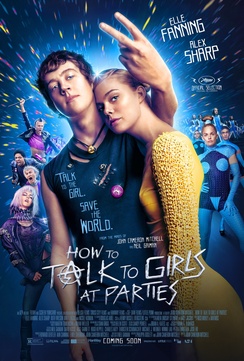 It's a story as old as time itself. Boy meets girl. Boy and girl fall in love. The girl turns out to be a cannibalistic alien. And Nicole Kidman shows up for some reason.

OK, perhaps this story is a bit different than the ones that you grew up watching, but that's precisely the point. Based on a short story by Neil Gaiman, How to Talk to Girls at Parties is visual awakening congruent with its late 1970s setting in London. The visual fireworks are provided by director John Cameron Mitchell, whom you may remember for his transformative work in Hedwig and the Angry Inch.

Mitchell adapted, directed and starred in Hedwig and a cult classic was born. With How to Talk to Girls at Parties, you can almost feel at times that Mitchell is trying too hard to recreate the spontaneous process of making a cult film, but it doesn't work that way. That's not to say that How to Talk to Girls at Parties won't someday reach that status, but for now, we can only judge it on its own merits, of which it has plenty.

The film is set in the punk rock revolution in London in 1977. A few teens are out looking for an after-hours party and stumble upon a group of visiting aliens instead. Hilarity and love ensue as the lead human boy and alien redefine love and question the authority that inexplicably rules their lives.

I am a huge fan of punk rock. So, sight unseen, having a film set in the punk underground of London in the late 1970s is a great first step for me. The fact that the music scene almost perfectly parallels the struggle that Zan (the lead alien teen played by Elle Fanning) is going through provides a proper tone for the age-old tale of literal star-crossed lovers.

Alex Sharp turns in a great performance as the human teen boy set on defying the expectations that are thrust upon him. I guess you could call him an overachiever because not only does he embrace the anti-establishment of punk music, but he unwittingly falls in love with alien.

The film is a visual tour-de-force with campy costuming on the aliens early on before the film settles in and becomes a more traditional take on forbidden love. Naturally, there are plenty of situational comedic moments that arise out of such an unnatural coupling, but the chemistry between Elle and Alex is the real driving force behind a compelling love story.

Much like punk music, our adolescent years are the ones in which we question authority and set out on our own to forge a path through life. Sure, it's highly unlikely that this path will include extra-terrestrial lovemaking, but you never know.

While the story suffers a bit as the result of being fleshed out from a short story to a feature-length film, there are plenty of fun moments from supporting aliens played by Ruth Wilson and Matt Lucas. They both bring a certain panache to their characters and their comedic chops are on full display. Their performances help to smooth out the rough edges of the story's expansion.

Finally, it would be impossible to talk about this movie without mentioning the pink elephant in the room. I know that John Cameron Mitchell and Nicole Kidman worked together previously on Rabbit Hole, but her inclusion in the film is a head-scratcher. She channels her style from the late David Bowie and as the underground punk queen Boadicea, she offers very little to film. Well, not that she doesn't add much, having Nicole Kidman in your movie is always the right move, but her character isn't really pivotal to the story and seems like she's only there to steal some of the spotlight from the young lovers.

How to Talk to Girls at Parties is a film that does have some flaws, but it is also filled with enjoyable sequences. You can tell that John Cameron Mitchell had a ball in recreating the early London punk scene and the visually striking alien scenes. But all in all, the movie is an enjoyable viewing experience and perhaps one that is enhanced with certain mood stimulants.

How to Talk to Girls at Parties is now available on DVD and Blu-ray. 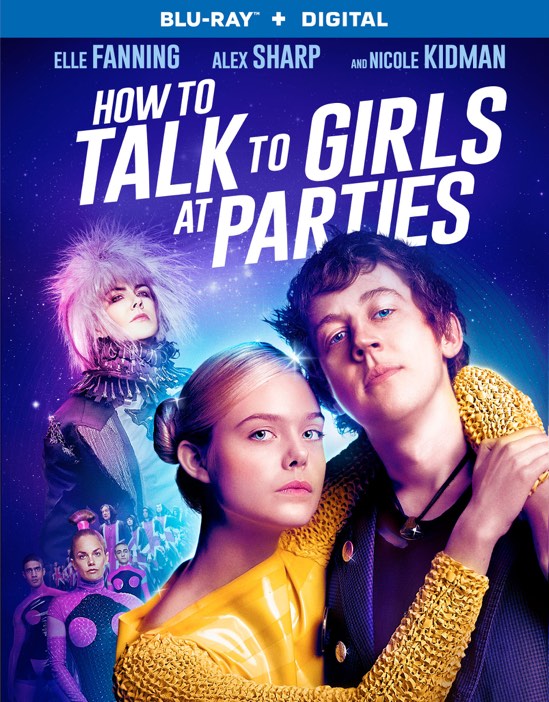 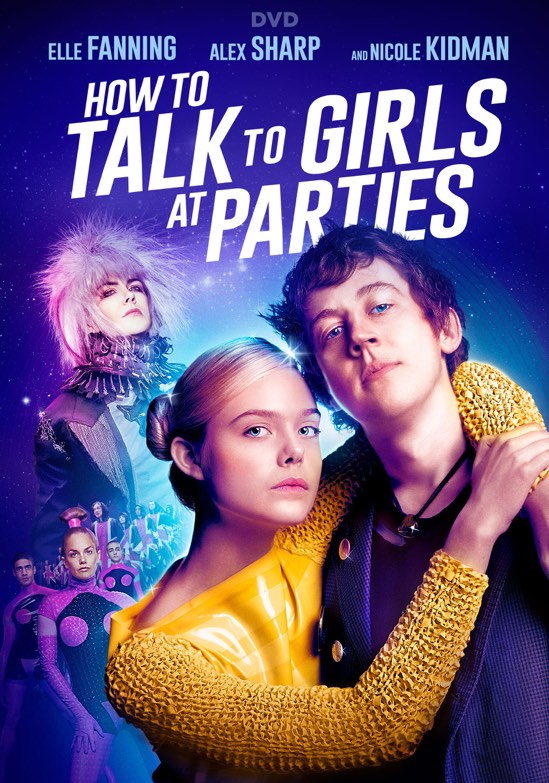