Let's face it. Ryan Reynolds is living his best possible life. Let's forget for a moment that he's married to the lovely Blake Lively. Let's also forget that he's a veritable box office monster with his Deadpool franchise.

Even the once laughing stock film on Ryan's resumÃ© Green Lantern shines brighter today than ever. Not only was it retconned out of existence in Deadpool 2, but it served as a nice one-off joke in Teen Titans Go! To The Movies. Although my co-worker recently confirmed that after all of the years, the film still doesn't hold up.

Good. Life is just too good for Ryan Reynolds right now, so he deserves at least one failure. Right? Well, as if he needed more residuals, Lionsgate is releasing Van Wilder on 4K UHD Blu-ray this week.

Yes, they recently brought Van Wilder out on Blu-ray to draft off the theatrical release of Deadpool 2, so I suppose this is just another way to make some change off of the Ryan Reynolds express.

For those of you that can't recall exactly which obnoxious college film this is, it's the one where Ryan Reynolds' character Van Wilder is proudly celebrating his 7th year as a college undergraduate. He is the epitome of Big Man on Campus until a sexy on-campus reporter and his father's threat of pulling his funds forces him to leave his party antics behind him.

As you may recall from our earlier review of the Blu-ray this year, we were surprised as to how well the film holds up over the years. I have to say that it didn't hold up as much in the intervening few months. I think it's safe to say that like a fine wine, this film is best enjoyed every few years or so.

That said, I was impressed again by the cast that has since gone on to bigger and better things such as Tara Reid, Kal Penn, Simon Helberg, Sophia Bush and Aaron Paul. This remains one of the vastly underrated movies in terms of high profile cast members that went on to become famous.

Again, I was struck by the cameos by Tim Matheson and Curtis Armstrong. These two were kings of college comedy in the 1980s, so to see them pop up in Van Wilder was a treat for the older set like myself.

The real question is whether the film is worthy of the 4K UHD treatment or not. To be honest, I was rather let down with the 4K transfer. It is a Dolby Vision upconversion from a 1080p original and unlike higher quality transfers, they did not do much to take advantage of HDR. This very much feels like an upconvert transfer with several dark scenes retaining their drabness, while others appeared to still be constrained by their earlier color gamut.

At the end of the day, the video quality was better than the Blu-ray, but not in a noticeable way that will knock your socks off. Where you could tell a difference though was in the audio tracks. The Dolby Atmos audio track was noticeably better than the 7.1 PCM audio track on the blu-ray, especially during the party scenes. Let's face it, it's a comedy, so the audio track isn't going to be especially busy, but when it does become busy, the Dolby Atmos track does a great job of balancing out the audio and providing depth for the ambient noise.

All in all, Van Wilder would not be a showcase film for the 4K format any more than say Clerks would be when it inevitably releases on this new format. That said if you were on the cusp of buying the Blu-ray, but waited, then you will be rewarded with the 4K UHD version. It also includes all of the previously released bonus features, so the 4K version now becomes the standard ownership copy for Van Wilder. 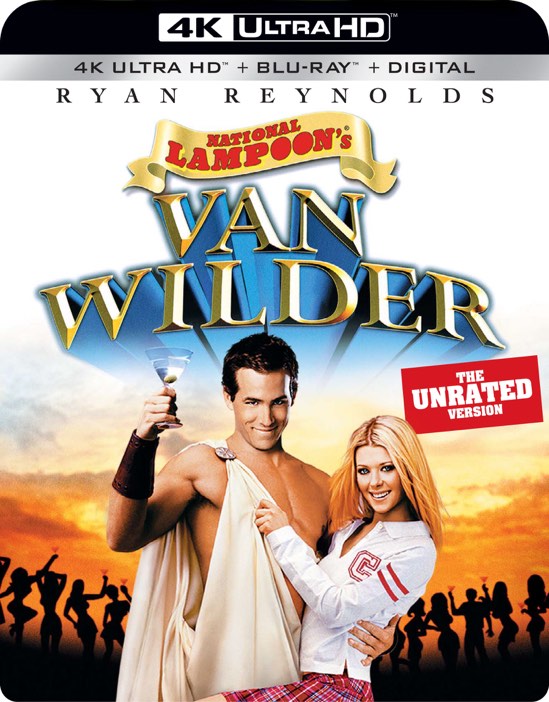