Review: Too much turbulence for 'Altitude' 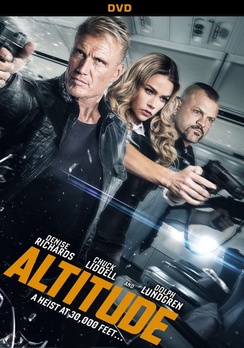 If you ever found yourself thinking, 'Man, I wonder what Denise Richards is up these days?' then Altitude is the film for you. Other than that, there really isn't anything in the film that moves the needle much.

I get it, suspension of disbelief and all, but there have to be limits and 191488{Altitude pushes those limits to the breaking point. I mean, it's like the writers of the film did absolutely no research on the physics of airplanes before setting their film entirely on a plane. I mean Snakes on a Plane didn't abuse the suspension of disbelief to this degree.

There might be a reason to watch the film if, you know, there was anything novel about the film, but we have literally seen everything in Altitude before in Passenger 57 or Con Air or Executive Decision. If you feel like you've seen this film before, then you have probably seen Turbulence or Red Eye or Non-Stop. No? Then you've definitely seen Flightplan or Air Force One or Airport '77.

In other words, this film has been done a time or twelve.

And I haven't even gotten to Chuck Liddell and Dolph Lundgren. These two action B-movie "stars" are known commodities and bring little to the film other than a reminder that we are no longer in the 1980s. Speaking of a blast from the past, I will say that the most entertaining part of the film was Jonathan Lipnicki as a flight attendant. That's right, the "human head weighs 8 pounds" kid from Jerry Maguire is all grown up and his recognition at least reminds us that films are supposed to be fun.

Unfortunately, not even Jerry Maguire himself could save this train wreck or plane crash from being a big flaming mess. Altitude is now available on Blu-ray and DVD.