World Series Game 7: The Tale of the Video Tape 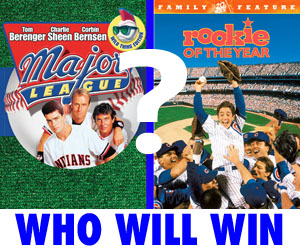 Here it is, folks. Game 7 of the World Series between the Chicago Cubs and the Cleveland Indians. When it comes to baseball, these two teams have a combined 176 years of futility, but come tonight, one of these "cursed" franchises will finally exorcise their past demons.

I'll be honest, I grew up a Detroit Tigers fan, but my top sport has always been hockey. Blame my father's French Canadian heritage and his determination to have me playing hockey by age three, but baseball has always been the second spot in my ranking hierarchy. Having moved to two cities without major league baseball (Indianapolis, Nashville) has only added to the erosion of my baseball fandom.

And yet, I can't deny a certain gravitational pull to the old TV set when the calendar flips to October, especially if the Tigers are in contention. I've also been a life-long underdog fan, so when it comes to the David vs. Goliath matchups, I'm always cheering for those holding the slingshot. When Boston's time finally came around, it was an easy choice for me, but this year has me legitimately perplexed.

I mean this is the ultimate battle of David vs. David and I'm unsure which team I should cheer for tonight. On the one hand, no matter which team wins, I will be genuinely happy for that team's languishing fan base, but on the other hand, it's always more fulfilling to have a team to pull for.

So, which team should I choose? I've given it much thought and I'm still not sure. I've got friends who have been waiting their entire lives for either the Cubs or the Indians to finally win the big one. Having grown up in Detroit, I was basically located smack dab in the middle between the two cities, so it's like I can cheer for the more local of the two teams.

If you're a devotee of cheering for your league/conference affiliation, then I suppose that I should cheer for the Indians since they are in the American League with my beloved Tigers. On the other hand, why would I cheer for a Central division rival who torched my Tigers many times this year?

So, given this insurmountable deadlock, I turned to the only metric that I could think of that is legitimately unbiased, a comparison of each team's greatest baseball movie.

So, here's the tale of the tape, the video tape as it were.

When it came to selecting the representative from each team, there was no contest. While it's true that baseball is probably the sport most featured in films, when it comes to Indians and Cubs baseball, there is only one (each).

When you think of futility and the Indians, only one film comes to mind: Major League. In the other corner is a film that encompasses everything that Cubs fans have come to think of their team: Rookie of the Year. In line with this year's storyline, both films champion the underdog mentality, so it will still be a tough decision.

Before we get the final showdown, I thought it might be fun to do a more general comparison to show just how hard it is to pick a favorite between these two teams. Celebrities are not shy when it comes to showing their baseball colors. On the Cubs side, they have heavyweights such as Bill Murray and Eddie Vedder, while the Indians' celebrity contingent is led by Tom Hanks and Monica Potter.

This matchup is really tight, but when you start to get into comparing the secondary fans, the likes of John Cusack and James Belushi for the Cubs far outweigh the next level of fans for the Indians such as Arsenio Hall and Drew Carey. And, come on, it's Pearl Jam. EDGE: Cubs.

While you might readily think this is a runaway, it's actually a lot closer than it first appears. Sure, Chicago has world-class cuisine and deep-dish pizza, hot dogs and hot beef sandwiches, but Cleveland has something called the Polish Boy, that looks pretty darn tasty.

Ok, who are we fooling? EDGE: Cubs.

Sure, Chicago was the birthplace of Eddie Vedder, but he got his musical start in San Diego and then Seattle, so Pearl Jam doesn't really count. The Smashing Pumpkins are great, but Billy Corgan is almost a negative on the city. Chicago did give us The Blues Brothers.

On the flip side, Cleveland gave us seminal punk band The Dead Boys and Nine Inch Nails. Oh yeah, Cleveland also has the rock and roll hall of fame. EDGE: Indians.

Time for the main event. Rookie of the Year vs. Major League.

One is comic masterpiece... and the other stars Charlie Sheen. I jest, I jest.

Rookie of the Year is a family-friendly comedy that stars a pre-American Pie Thomas Ian Nicholas as a pre-teen little leaguer who pretty much sucks at baseball, but has big league dreams. After a broken arm heals "a little too tight" (this was 1993 when medicine apparently didn't exist), the little leaguer can throw the baseball 100 MPH and the lowly Cubs take a chance on the pint-sized hurler. Yep, you guessed it, behind the heat of his arm, the Cubs win the World Series, even when his magical arm falters in the big game.

Major League follows the lowly Cleveland Indians whose new owner has plans to move the team to Miami. The only catch is that the only way she can enact a move clause in the team's lease with the city of Cleveland is if the attendance falls below some absurd number. So, she sets about to field the worst team in the history of baseball. Similar to the formula behind Bad News Bears, the ragtag group comes together to beat all of the odds.

Major League is an all-time classic full of stars both on the rise and fall full of classic quotes, while Rookie of the Year is best known as the film that starred that one guy from American Pie. Both films have their fair share of crazy actors, with Charlie Sheen in Major League and Gary Busey in Rookie of the Year.

While most of the chips are lining up with Major League and the Indians, let's not forget that the most important criteria is the bottom-line. In Major League, the Indians don't win the World Series, they simply made the playoffs. We learn in the horrible sequel that they lost in the playoffs. The Cubs actually win the World Series in Rookie of the Year, so that has to count for something.

Also, I think it's fair to hold the crappy sequels against Major League, so that takes a bit of shine off of their luster. Well, when you add it up, it's a close game, one that I think could go into extra innings. But at the end of the night, my heart goes to the underdog and the underdog film would be Rookie of the Year.

There ya go, the Cubs will win tonight after breaking down the video tape between Major League and Rookie of the Year. That is, unless the Indians bring in Wild Thing.

Then, all bets are off.