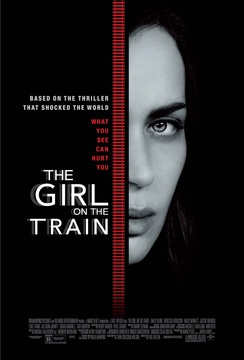 Just when you thought this was going to be a boring weekend, you were reminded that the New York Comic Con was ongoing. While New York's Con will never rival that of its originator on the other coast, it is starting to get some real traction with studios in terms of being a great place to promote films and TV shows.

Give its early October date, the New York Comic Con is perfectly positioned for studios to promote new Fall TV shows and bigger genre pictures that are starting to creep far away from their traditional Summer stomping grounds. While the Fall/Winter months have traditionally showcased family films and awards contenders, the trend in recent years is that studios aren't afraid to open big blockbusters in December or even January.

As for us, we were able to track them down online shortly thereafter and don't worry, we have them all for you below. But first, let's check out this weekend's box office performance.

This weekend's biggest new release The Girl on the Train did indeed snag the top spot at the box office, but its number isn't all that much to cheer about. The adaptation of the best-selling book earned about $25 million in its opening weekend, but the reviews haven't been all too kind.

Many people have compared it to similar subject matter best-seller-turned-film Gone Girl, but it's clear that Girl on the Train will fall far short of its predecessor's $167 million box office run. I have not seen The Girl on the Train, but I read the book and was eagerly anticipating this adaptation. A few friends whose opinion I hold in high regard did see it this weekend and they were all in agreement that it was a letdown from the stellar book.

Elsewhere in the top five, the four holdovers put up decent numbers to help keep the total weekend competitive with last year's numbers. Miss Peregrine's Home for Peculiar Children earned $15 million to bring its total up $51 million. It's still on a slow trajectory to $100, but I do feel that it will get there.

In sixth and seventh place, the two other newcomers are duking it out. According to estimates, The Birth of a Nation squeaked by Middle School: The Worst Years of My Life with $7.1 to $6.9 million. There's a good chance that these films will flip flop each other when the final numbers are released.

Either way, both films are on pace to end up with about $20 million at the box office.

Of course, it might just be my age showing, but I'm getting a real Breakfast Club vibe from the opening. Like Power Rangers is the long-lost sequel to the seminal John Hughes film where they all go out hiking on Sunday and get magical powers.