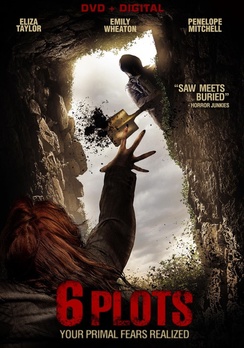 I apologize in advance because we have a lot of reviews to get to today. That's the nature of the new reality that we find ourselves. You might have noticed that over the last few months, the first Tuesday of each month has had a disproportional number of new movies arriving on DVD and Blu-ray than the rest of the month.

This is intentional as the smaller studios have banded together to make the first Tuesday of each month an event atmosphere with plenty of small to medium titles to compete with the rest of the bigger titles later in the month. That's not to say that the "big six" are playing along, you only have to look as far as this week's X-Men: Apocalypse to see that they don't mind crashing the party with a box office heavyweight.

Of course, the way Fox has been performing at the box office of late, it might not be too much longer before their "big six" status is revoked. The bottom line is that instead of having the films more evenly spread out through the month, each month is becoming increasing top-heavy in terms of the sheer number of titles.

Today, for example, there are 234 DVDs and Blu-rays coming out. Of course, with the number of video stores shrinking by the day, it's becoming that much harder to actually seek them all out.

With so many films to choose from, it is even more crucial to know which ones to seek out and which ones to avoid. Unfortunately, one film in the latter camp is this film, 6 Plots.

As a pure horror film, the story idea behind it is quite sound. Above average looking teens (check) throw a party (check) where alcohol and drugs are consumed (check and check). At some point, one of them wakes up alone and learns that her six friends have been buried alive and it's her responsibility to find them before they die.

Again, as a concept, the idea is sound, but the execution is anything but flawless. 6 Plots is an Aussie film that won't do much to dispel us Americans from our beliefs that each Australian secretly owns a koala bear and has a major crush on Crocodile Dundee.

The problem is that despite the fact that they were making a horror film, it often felt more like an after-school special complete with the overbearing father who is too tough on his athlete son. Ultimately, the film creates rules and they are broken and consequences ensue, but since we really have absolutely no investment in the characters, we are left with no one to cheer for.

The fact is that they spend a good 20 minutes developing this characters and not a single ounce of compassion is to be seen anywhere. At the end of the day, I'm sort of hoping that the killer wins and they all die. Better yet, I'm cheering the real world creation of a time machine so I can go back in time and choose not to watch this film.

If you a die-hard horror film completist, then, by all means, check it out. But if you are the type of person who values their brain cells and have better things to do with your time, like watching paint dry, then avoid this one like the plague.