Review: There can be only one definitive 'Highlander' 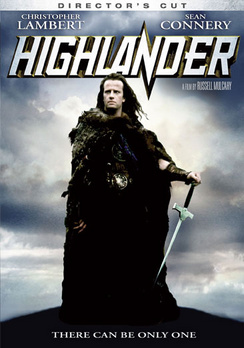 I have a confession to make. Up until this past week, I had never seen a single frame of any of the Highlander films. So, when the opportunity to review the 30th Anniversary Edition, I figured I was either the most (or least) qualified person to pen an unbiased review.

Of course, by not having grown up with lore of Highlander in my DNA, would I be able to appreciate a film that has a cult following and has come to surpass the constraints of conventional analysis. For instance, it would be as unfair to compare the special effects by today's standards as it would be to criticize the lack of color in It Happened One Night.

And yet, I have seen enough good (and bad) films to be able to look beyond the technological constraints of the 1980s and see the film for what is on the inside. What I discovered is that Highlander truly is deserving of the acclaim that its fans place upon it.

To say that I went in with a tabula rose would be a lie. While I had never seen a single frame of the film before, the Highlander films are as much a part of popular culture as "Luke, I am your Father." *Spoiler Alert*

I could recite the popular edict, "There can be only one" and I knew that the only way to kill a Highlander is to decapitate him. I also knew that Sean Connery and Christopher Lambert were two Highlanders, that pop up in various volumes of the six-film franchise.

So, the rules were fuzzy at best. Obviously, there can be more than one. Or, at least that was my view from the outside looking in.

After seeing the film, I get it now and I can see the attraction to its fans. As immortals preparing for a massive final battle (The Gathering), the storylines are infinite and could span the entire breadth of human existence. Of course, since I have now only seen the first film in the franchise, I'm left with as many questions as I had before watching Highlander.

For instance, where did the immortals come from? How are they created? While Conor MacLeod is supposed to be "only one" at the end of the film, I doubt that lasts long since there are five more films (so far) in the franchise.

The one aspect that I do lack perspective on by not being a fan of the films is the ability to compare the special features on this version to previous incarnations. This director's cut contains about 10 minutes more of footage than the theatrical release, but it is my understanding that this cut of the film has been released before. And since I haven't seen the theatrical version, I have nothing to compare this version to.

What I can add is that the special features including deleted scenes, a making-of video and an interview with Christopher Lambert helped to provide me with even more gravitas that may or may not be common knowledge with diehard fans. Unlike most films released today, this package's bonus features definitely add value to the purchase.

As a side note, I'm probably the only person who became a fan of Clancy Brown from his time on Lost and not for his portrayal of the Kurgan. The 30th Anniversary Edition of Highlander is now available on DVD and Blu-ray and while there have been deals and discussions about rebooting this film, nothing has been solidified yet.

Summit has the rights to the film and I'm sure that Lionsgate will eventually get around to fast-tracking a reboot. While I'm normally pessimistic when it comes to remakes, this is a story that I think would be served well with the advances in technology. Besides, the lore of Highlander allows them plenty of leeway to remake the film while still adding plenty of new touches that could help expand the reach of the franchise even further.