Review: 'The Night Manager' is must see entertainment 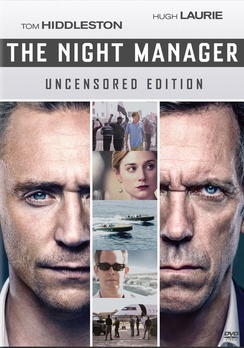 You know the old NBC slogan, "Must See TV"? Well, some might see it as a bit antiquated by today's standards, but I would argue that it has never rung truer. Sure, we find ourselves in the midst of a digital revolution where the very concept of entertainment is changing. The lines of entertainment are blurring and it's becoming increasingly more difficult to differentiate between TV and movies.

Case in point: this week's new entertainment option The Night Manager. While technically, it is a TV miniseries, the scope and feel of this nearly six-hour journey place it more squarely in the film category. The reality is that as we navigate this new paradigm shift, the cost of producing high-end entertainment is becoming so reasonable that TV product can often look and feel like a Hollywood blockbuster.

You only have to look as far as Marvel and the way they blend their film and TV properties and you can sort of see how the future of entertainment is going to shake out. Filmmakers are embracing this route because of the fact that an "event TV series" allows them the flexibility to tell their story without being forced into the 120-minute constraint of a theatrical film. Heck, even Kevin Smith is turning his sequel to Mallrats into a 10-hour event series.

The fact of the matter is that you couldn't properly tell the story of The Night Manager in only two hours. If you tried, the end result would be a convoluted mess that has doomed many films that have taken that route in the past. No, the complex twists and turns of the John Le CarrÃ© novel are best served by the ample scenery that this format allows.

Home entertainment is the perfect vehicle for this new type of entertainment in that it allows the audience to control how fast or slow they consume it. Netflix has ushered in the era of binge-watching which has pretty much ruined the time-honored tradition of building excitement and suspense over weeks and months. Now, you literally have a few hours after a new show is released before spoilers start showing up on social networks.

Of course, that makes one want to revisit the old rock n roll adage about is it better to burn out or fade away? Take the Netflix juggernaut Stranger Things. It was the entertainment event of the summer bar none, but the majority of that show's hype was contained to the two weeks after it was released and as time has gone on, it is slowly fading away from the top of our in the moment pop culture awareness. Contrast that with AMC's The Walking Dead which splits its season into two halves and pretty much dominates our social culture for two different three-month periods each year.

Which strategy is better? Will we even remember Stranger Things when season two eventually drops next year?

Sorry, I took a bit of a tangent there, but the point is that we are definitely experiencing a change in the way we consume entertainment and The Night Manager is a great example of what we might see more of in the next few years. Tom Hiddleston and Hugh Laurie are two A-list actors in Hollywood and their involvement automatically raises the entertainment bar a few rungs.

Laurie is an international arms smuggler and he simply seethes his villainy into each and every one of his frames. He is so good here as Richard Roper that I hope more evil roles are in his future because he is the consummate bad guy and a more than worthy enough foil for Hiddleston's Jonathan Pine, a hotel manager turned international spy that would make James Bond blush.

Their on-screen chemistry is so good that after nearly six hours, I didn't want to see it come to an end.

One last thing that I have to point out is the wonderful cinematography in this miniseries. I'm not sure what the budget was for this show, but the shots were so gorgeous that I had to remind myself on several occasions that I wasn't watching Jason Bourne or the latest James Bond film. We all walk around with a film camera in our pocket these days, so it's not surprising to see these lines blur even more.

The Night Manager debuted earlier this year on BBC and AMC, but there's a pretty good chance that you missed it. The DVD or Blu-ray is a perfect solution for you to discover this wonderful gem of entertainment. Then, the power is in your hands, will you rush through it in one sitting or will you enjoy it over time and build up the suspense?

Is it a TV series? Is it a film? I'm not sure that there's an easy answer to that question. The best answer is that it is entertainment and The Night Manager is most certainly must see entertainment.