Review: 'The Duel' provides a fresh take on a western clichÃ© 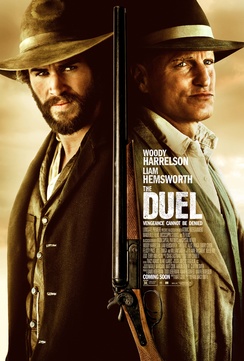 When I say western and Duel, there's probably a very distinct image in your head. Two guys facing each other in the middle of the street of an old western town ready to draw their guns and end the other fella's life.

This was precisely the image I had when I put in the new western film The Duel. With prominent pictures of stars Liam Hemsworth (no not that one) and Woody Harrelson on the cover, I was sure that they would be assuming the position during the film's climax.

Thankfully, I was wrong.

For some reason, the number of really good western films has gone down tremendously since Clint Eastwood's Unforgiven came out in 1992. Sure, there have been half-hearted attempts (mostly by Quentin Tarantino) to revive the genre, but it's pretty much dead as we steam forward into the dystopian future that Liam is more accustomed to finding himself in his films.

It seems like every western film has the same old worn-down clichÃ©d storyline about revenge and frontier justice. The Duel is different. It's a film about revenge... and yeah um, frontier justice, but there's enough of a twist to make the film stand on its own two legs.

The titular standoff is not the tried and true gunslinging showdown, instead, it features something that children of the 1980s will see as an homage to Michael Jackson's video for "Beat It." The combatants are each given a knife in their dominant hands and then their nondominant hands are tied together.

This isn't the impersonal and polite form of a public massacre that usually pops up in most western films and a popular new Broadway musical. No, this is up close and extremely personal fight where the will to survive is tantamount to everything else. There's a certain brutality required for a death match of this type and luckily Woody Harrelson is uniquely qualified to bring this "Helena Duel" to life on the big screen.

The other departure from the usual western film is within Harrelson's Abraham character (and yes, he has a son Isaac - Biblical much?). He isn't your typical bad guy dressed in black with a pointy moustache. Quite the contrary, he's usually decked out in all-white and is known for his hairless physique. Oh yeah, and he's completely bat-shit crazy.

There's one scene in particular in which Woody Harrelson channels his inner Charlie Manson that is both scary and impressive as to what it is able to accomplish. This is a man, a preacher no less, that has been completely dissuaded from reality thanks to the Civil War and is left trying (and failing miserably) to put the pieces of his mind back together.

This is a character that is right in Harrelson's wheel house and he knocks it out of the park. Of course, fans of The Hunger Games won't be too surprised to learn that Haymitch and Gale finally come to blows.

Speaking of Liam Hemsworth, he has been unavoidably cast in his brother's shadow, but he is finally starting to make a name for himself with roles like this one. If there were any questions about his ability to carry a film, they are answered in a positive way with this film.

If you are a fan of these two actors or westerns in general, I recommend that you seek out The Duel, which is currently available on DVD and Blu-ray. You won't be disappointed and you may actually enjoy the cat-and-mouse antics of the two leads as they fight for their very survival in a brutal world marked by savagery everywhere you go.