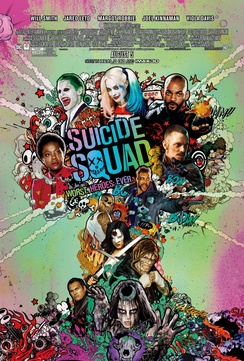 This weekend's story at the box office is one that might be home in a remake of Dr. Jekyll And Mr. Hyde. The good: Suicide Squad broke the record for an August opening. The bad: critic and audience reviews have been less than kind.

That pretty much sums up Warner Bros.' entire foray into comic book movies with DC. For every positive step forward, they take two steps back. Much akin to Batman v Superman: Dawn of Justice earlier this year, the film is set to make a bundle at the box office, but is it enough and will it be enough to support the dozen or so films that Warner Bros. is planning for the DC universe?

Perhaps an even better question is, how can Marvel seemingly print money and positive reviews while DC continually finds its cinematic excursions such a slog?

We may never get the answer to this question and if things don't turn around soon, it might just become moot. I have not seen Suicide Squad yet, but I am interested to hear what you thought of it. The people whose opinions I trust the most to be in line with mine have been split down the middle and honestly, I'm not sure what to think on this one.

There seems to be a lot of passion on both sides of this opinion, which side do you fall on?

As alluded to earlier, Suicide Squad broke Guardians of the Galaxy's August opening record with an estimated box office take of $135 million. Not only that, but it broke the August record for biggest Thursday preview night box office and largest single day in August record for its $65 million Friday, and yet, audiences seemed to be affected by the bad press and word of mouth.

With a $65 million Friday, Suicide Squad should have ended up with closer to $160 million, much like The Dark Knight which opened with $67 million on its way to a $159 million opening. But, the depleted weekend numbers might indicate a bigger than normal drop next weekend as well.

The real question is will Warner Bros. be happy with that number for the film that cost $175 million to make. Sure, the film will turn a nice profit when it's all said and done, but with such elevated expectations and the weight of the DC franchise on its shoulders, will Warner Bros. start to question its future in the DC universe?

Probably not. They need to be in the comic book business for as long as Disney is able to churn out hit after hit, for if they raise the white flag, then Warner Bros. might never be able to recover.

The other new release this weekend didn't have quite the life longevity as its namesake. Despite a top-notch cast including Kevin Spacey, Christopher Walken and Jennifer Garner, Nine Lives was DOA this weekend and only managed $6.5 million for a sixth place finish. The meager returns will only get even more sparse this week when the more well-received Pete's Dragon is set to debut in theaters.

A final box office number of $20 million would be a huge win for Nine Lives, but it will be a real struggle to achieve it. I feel that this cat's number will be up when it gets to $15 million.

No pads helmets nothing!! pic.twitter.com/sBUxUlyDTz

They are going fast pic.twitter.com/hkddQFVOo2

I hope the lady ok but we on the lead now pic.twitter.com/pBDdUOQRSr

Where is the Murphys?! pic.twitter.com/mL11Yc9x1Q

After many pleas to NBC to get Leslie down to Rio officially (she does have a relationship with the network thanks to Saturday Night Live), it seems that it might actually come to fruition.

No words as of press time, but please Leslie go and make us all laugh!

UPDATE It looks like Leslie is going to Rio. Yay!