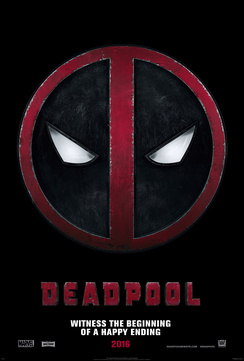 I'm trying something a little different and if all goes to plan, then you'll wake up to this little surprise. If not, then I fell asleep writing it and hopefully I still make it by the end of Monday.

Obviously, adjustments need to be made and I'm going to try my hand at writing the MM on Sunday night and queueing it for a first thing Monday delivery. I figure that if I start early enough, I'll still be able to meet my self-imposed Monday deadline.

This weekend was one of those wonderful little surprises that make this industry so interesting. By all accounts, Deadpool was set to do good business, but I doubt even Ryan Reynolds could have predicted such an amazing performance.

Love was in the air this weekend, but moviegoers opted for the non-traditional route and that bodes well for 2016 as it is shaping up to be one of the more non-traditional years at the box office. Well, why put it off any longer? Let's mix.

If you would have told me last week that Deadpool would have broken at least 9 records at the box office this weekend, I would have called you crazy. And yet, here we are in the midst of another record-breaking weekend.

Deadpool has grossed an estimated $135 million over the three-day weekend and looks to finish with $150 million when today's holiday receipts are added in. The ramifications of this performance can not be understated as it proves that audiences will show up in droves to watch a more adult comic book film. In fact, this is the first R-rated film to open with more than $100 million.

After The Force Awakens destroyed record books only two months ago, people were wondering whether it was simply a Star Wars thing or if the box office could maintain the momentum. Sure, there are sure-fire tentpoles coming down the pipe, but Deadpool's success in February is a clear indication that people will show up to watch quality films, no matter when they are released.

We are really in uncharted territory here, but a gross of over $300 million is all but guaranteed when looking at other films that have performed similarly. Of course, no R-rated film has ever reached these heights before, so we really don't know what will happen. I'm going to go out on a limb and predict a nice $400 million total when the run ends, but we will know more when we see next weekend's numbers.

On the other end of the spectrum, Zoolander 2 failed to live up to its lofty expectations. The sequel opened with $15.7 million, well below estimates leading up to its opening. In fact, it opened up with roughly the same amount as the original film did 15 years ago. I guess there is such a thing as too much time between sequels, either that or it's the whole Justin Bieber effect.

Zoolander 2 will struggle to make it to $50 million which will hopefully seal the deal on any more sequels. The original film was fun and enjoyable, but I think most of us have outgrown the whole Blue Steel fad.

The weekend's other newcomer How to Be Single performed in line with expectations with $18.8 million. The Rebel Wilson comedy finished in third place and looks to finish with $50 million or so.

Kung Fu Panda lost its crown, but still made almost $20 million in second place. The animated film has grossed just under $100 million in three weeks and still looks on pace to finish in that $150 million range. In other news, Hail, Caesar! earned $6.6 million to bring its total up to $21 million. I bring up the Coen brothers film because the wife and I saw it this weekend and absolutely loved it. It truly is an amazing homage to Golden Era Hollywood and if you are a film aficionado, then you won't want to miss it.