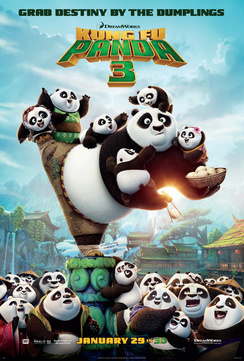 Tuesday is the new Monday.

Well, after the weekend I had, I hope none of you judge me too harshly for being a little late this week with the weekend wrap-up. I started the weekend off with the final concert from one of my favorite local band, Those Darlins. This was a really tough one because I had been following them since their inception a decade ago and while I'm quite as young as I once was, their concerts always made me feel like I was in my 20s again.

Being a lifelong hockey fan and player for almost as long, you know that I was excited about the NHL All-Star game being Nashville this past weekend. So, needless to say, I didn't get much sleep this weekend and several adult beverages were consumed.

I was told that there were other things that happened this weekend and some of them even took place somewhere other than Nashville. I don't buy it, but here are some things that "allegedly" took place elsewhere.

There was little doubt that Kung Fu Panda 3 was going to win the weekend, but would it be as successful as the previous two films in the franchise? Would it set a new January record? The answers are yes and no.

Kung Fu Panda 3 wound up with $41 million at the box office and it was in line with the second film's $47 million opening, but well shy of the original film's $60 million debut. Likewise, it set a record for biggest animated opening in January, but it fell just short of Ride Along's record January opening of $48.6 million.

Longterm, Kung Fu Panda 3 should perform better than expected thanks to the lack of family animated competition until early March. I wouldn't be surprised if it ends up with over $150 million.

Disney's true-story of a courageous Coast Guard rescue, The Finest Hours, performed in line with expectations by earning just over $10 million. The film was seemingly well-received by critics and it should hold well, but I don't think it will make it up to $40 million.

The Marlon Wayans spoof Fifty Shades of Black has dark days ahead after only making $6.1 million this weekend. It is good enough for ninth place for now, but it might actually drop a spot once the final numbers are released.

What we have here is a failure to Mixer.