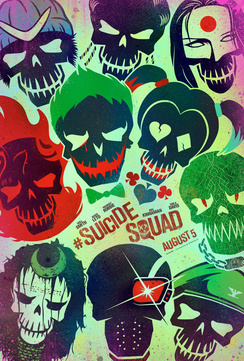 While we projected a top 10 finish at the 2016 box office for Suicide Squad, it is the one film from this year with the biggest question marks surrounding it. It's a comic book movie coming out in August and while that worked just fine for Guardians of the Galaxy, the overwhelming evidence indicates that it will be an uphill climb.

This year also represents a phase of change for DC as they attempt to mimic the highly successful connected cinematic universe structure of their biggest rival Marvel. Everyone knows that the Marvel Cinematic Universe (MCU) is synonymous with printing money, but the returns have been mixed, at best, for DC.

Don't get me wrong, the Christopher Nolan Batman films were fantastic, but their darker, realistic edge were contrarian to the hard and fast rules that Marvel has been living on for the last decade. If I had to point out the biggest difference between Marvel and DC films to date, it would be that Marvel films just capture the essence of fun, while DC films tend to be more serious and gritty.

There's nothing wrong with serious and gritty and I actually prefer that tone over the comic feel most days, but from a mainstream standpoint, comic book movies are supposed to be fun. Enter Suicide Squad.

It will be DC's second film of the year and the first one to have a main character from an earlier film cameo in it as Ben Affleck's Batman is said to have a small role. Affleck will originate his take on the caped crusader in March's Batman v Superman: Dawn of Justice. It is possible that Jared Leto's Joker might make his debut in Dawn of Justice, but the implication is still the same. These two DC films represent a shift in direction from the studio, so it's imperative that they both resonate with audiences and make a ton of money.

The jury is still out on Batman v Superman: Dawn of Justice as it looks more like a straight forward DC film. But one thing is certain, the team up of DC's two most popular heroes is guaranteed to be a money maker. Suicide Squad is the riskier proposition for sure, but it looks like DC finally realized that they need to make their films fun.

The new trailer debuted last night and it's a revelation when it comes to DC films. There are a lot of things stacking up against Suicide Squad, mostly unknown characters, an unsavory release date and a likely hard PG-13 or R rating. But there's plenty to like as well.

As you can see to the right, they have taken a novel approach to the aesthetic of the marketing materials. It is a bold statement to step away from the established look of the genre, but a welcome one, at least, to these eyes. They also released character skull posters which continue the look and feel of the main poster.

Overall, though, this film feels like a fun ride which is really what comic book movies should be. Sure, it looks like a more mature take on the genre, but we have seen that audiences can be receptive to that as the upcoming Deadpool proves. Of course, there's a long way to go until August, but if this trailer is any indication, we should be in for a real treat.