'Carol' leads an even race with five Golden Globe nominations 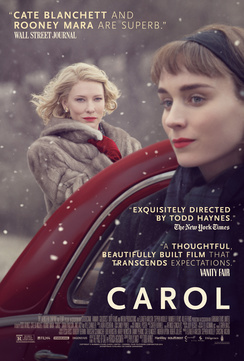 If yesterday's announcement of the SAG nominations officially kicked off awards season, then my annual forgetfulness that the Golden Globe nominations are announced the day following the SAG noms is a reminder to us all that we have indeed reached awards season.

It's not like it should be a big surprise by now. It's December. It's the end of the year. This is the logical time for nominations to start rolling in.

Oh well, maybe I'll be more on top of it next year. Yeah, I doubt it too.

At least this year I can blame my tardiness on the Star Wars blinders that most of us have on right now. We are down to a week to go and there's very little else in our world right now. Just ask my wife and kids (sorry again). But if you were holding out hope that The Force Awakens would garner a slew of Golden Globe nominations, then I'm sorry to inform you that like most other big budget action/sci-fi films, it did not attract much awards consideration.

In fact, it did not get a single nod from The Hollywood Foreign Press Association (HFPA), but that was to be expected as the HFPA does not recognize the technical side of the industry as much as say the Oscars. No, this year's big winner from the Golden Globes nomination process was Carol.

Carol. You know that 1950s drama about two women exploring their burgeoning feelings for one another amidst the backdrop of simpler times when such relationships were taboo? In other words, the film released last month in four theaters that no one saw. Correction, a few people have seen it as it has made just over $800,000, but still, it's probably not a film that many people in the mainstream had in their Golden Globe nomination pools to lead in the number of noms.

Actually, Carol has been almost universally praised and the performance from Cate Blanchett has been hailed as the odds-on favorite to win the Oscar for Best Actress, so it's not a total shock. And the film is from The Weinstein Company which sort of revels in their ability to position their films to make just this sort of awards season statement. It's a pretty good bet that after this whole Force Awakens stuff quiets down that Carol will get a more proper limited release just in time for the Oscars.

Besides the best actress nom for Blanchett and Best Picture - Drama nom, Rooney Mara also nabbed a nomination for Best Actress while director Todd Haynes was recognized for his helming. A bunch of films tied for second with four nominations apiece including The Big Short, Room and The Martian.

In other words, the awards race looks to be more wide open than ever. We will finally start to get come clarity when the Golden Globes air on January 10.