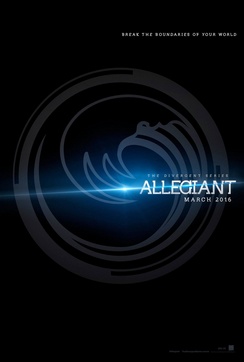 Not to co-opt a saying about the state of Texas, but it just seems that everything is bigger in the movie. This is certainly the case when it comes to any dystopian teen series of books that garners even a modicum of box office success.

The stylish thing to do these days is to take the last novel in a series and split it into two films. While this strategy has gifted the studio with the expected box office spoils, one has to wonder at what cost? There's a very noticeable dip in the box office take of the penultimate film, but that dip is more than made up when the last film comes out.

I should chime in here with some full disclosure. I've read the Divergent books and Allegiant was a complete letdown in my opinion. I didn't think there was enough there to fill out one let alone two films, so I'm sort of intrigued by the idea of splitting it into two films. On the one hand, that could water down an already thin story, but there's potential there to add story arcs that might make the overall franchise better.

Well, this week we got the first look at Allegiant and the world beyond the ruins of Chicago. As with any good teaser worth its salt, the trailer leaves us wanting more, but is it enough? Divergent made $150 million at the box office before Insurgent took a step back to $130 million. I find it hard to believe that Allegiant will top $100 million.

Are we reaching a point of franchise fatigue or is this just a case of subpar source material being stretched beyond its intended purpose? Don't get me wrong, there are things I enjoyed about Allegiant and the Divergent series as a whole, but sometimes I wonder just how far studios are willing to go to make a buck.