Why does everyone love Miyazaki's 'Spirited Away'? 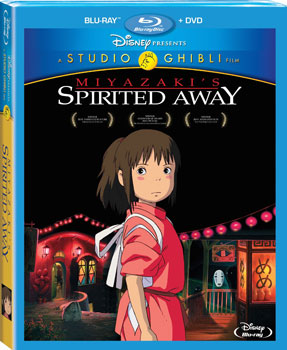 Sometimes movies are like eating your vegetables. There is nothing like sinking your teeth into a great, action-packed movie like Avengers: Age of Ultron or Jurassic World. They are the film world's version of pizza. A perfect food that can be enjoyed again and again, even with minor imperfections like slightly burnt crust or nagging plot holes. But one cannot subsist on pizza alone.

You have to eat your veggies too. That's what John and I try to do with the VideoETA podcast. For the (much beloved) movie review portion of the program, we try to tackle movies we've otherwise neglected. As a result I've found a few new favorites like Phantom of the Paradise and True Romance. That first flick had brussel sprouts written all over it. I pinched my nose, closed my eyes and -- and you'll never believe it -- I loved every morsel of it.

I was recently presented the opportunity to watch Spirited Away for the first time. It's the 2002 film from Japanese animation master Hayao Miyazaki. Millions adore this movie. It won the Oscar for Best Animated Feature in 2003. It's currently number 33 on IMDb's Top 250 movies of all-time. Metacritic's Metascore is 94 out of 100. Rotten Tomatoes has it at 97%, enough for its Certified Fresh rating. 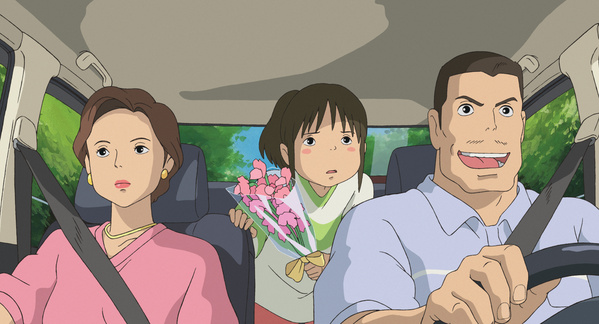 With all this in mind, I sat down with the Blu-ray last night, eager to dive into the feast before me. The first thing that struck me was its beauty. It looked extraordinary on my HD television. I love animation and am particularly amazed by traditional, hand-drawn animation. There is such great depth to this film. We're not talking '80s cartoons like He-Man where characters moved over a static backdrop. I could've easily watched the moving pictures with the sound muted. In fact, I wish I had.

I could not get into the story at all. I have no problem with fantasy. Suspending my disbelief comes easy. I guess I wasn't ready for the strange trip Miyazaki would be taking me on.

It's the story of a 10-year-old Japanese girl named Chihiro. She must relocate with her mother and father. En route to their new home they happen upon an abandoned train station. It's a portal to a different world kind of like the wardrobe closet to Narnia or the rabbit hole from Alice in Wonderland. Like those other works, that's when things get crazy. 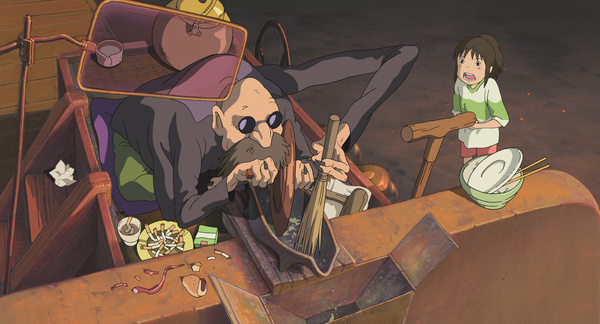 The center of this strange world is a bathhouse resort. It's home to some wild characters: the spider-like Kamaji, the big-headed witch named Yubaba, a giant Baby, some disembodied heads, the kind but tough Lin, and Chihiro's new friend Haku. Trying not to spoil things too much, I'll leave the rest for you to explore. It's so far-out, the mythology seems to be made up as it goes along.

That's my biggest problem with Spirited Away. Chiriro (voiced in the English version by Daveigh Chase) is annoying. I've never been a 10-year-old girl and I couldn't identify with the character or her plight to reconnect with her missing parents. Her voice is grating and even her fellow characters call her out for being a brat.

That's the major theme of the film. Chiriro must mature through adversity to make her way out of this fantasy world, just as she must face change in moving to a new home. The moral is so obvious it practically hits you over the head.

Don't take the presence of a lesson as a good reason to let kids watch this movie. This isn't typical Disney fare. With a young protagonist, you can expect pre-teens to be engrossed in the movie but some things will petrify really young viewers. We're talking about dark spirits that eat people and subsequently regurgitate everywhere. 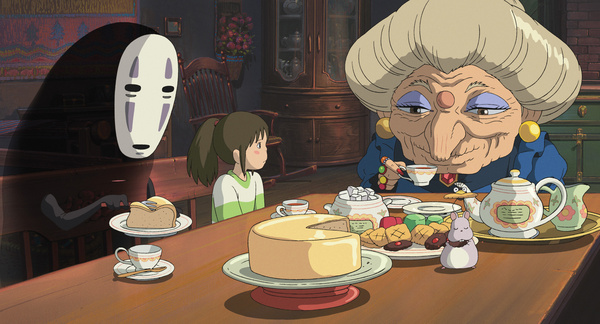 Spirited Away reminds me of children's programming from a different era. It's like an anime H.R. Pufnstuf or Land of the Lost. A bizarre and not completely kid-safe fantasy that's sure to be ingrained into viewers' psyches by its outrageous nature. That has to be part of the appeal for some fans. Kids shows have become so antiseptic that one in contrast is fascinating.

I would like to hear other opinions on this film. If you like Spirited Away, please comment as to why. Perhaps if I had more points of view I could truly enjoy this movie held up by most as a new classic.

Fans will love to know that Spirited Away is available for the first time on Blu-ray. In addition to the feature in English and original Japanese, the disc contains several bonus segments: Introduction by John Lasseter, The Art of Spirited Away, Behind The Microphone, Original Japanese Storyboards, Nippon Television Special, Original Japanese Trailers, and TV Spots. The release includes a DVD copy of the movie as well. 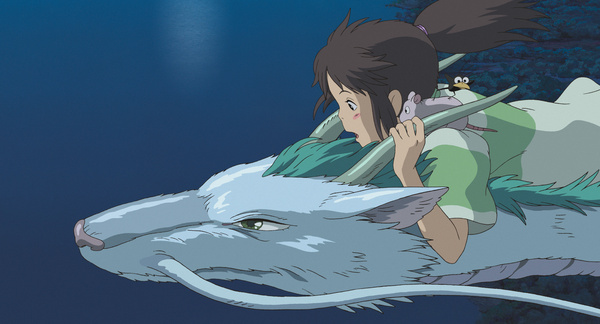