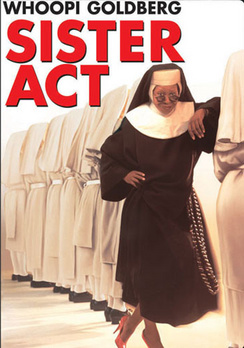 There are few things that rankle my feathers more than Hollywood giving the greenlight to yet another silly remake, but if I wrote about each one, this site would be one long litany of hate. It seems that every day we are greeted with news about Hollywood looking to reboot/remake/sequalize reboot some film, franchise or series from the not so distant past.

My question is when will it stop?

Thankfully, many of these purported remakes fizzle quickly like that million dollar idea that you and your bros thought up at the bar the night before once the sanity of daylight settles in. But this latest "announcement" that Disney is remaking/rebooting 'Sister Act' is the final straw.

Has creativity reached a whole new low that we've decided to remake a film that would be as anachronistic in today's society as remaking The Poseidon Adventure. Are they going to stick with the original story of a Vegas lounge singer (do they still exist?) hiding out in a flock of nuns? Will today's kids even know what a nun?

So, if they ditch the nun storyline, isn't this just another fish out of water story? In that case, it sounds like the new Point Break. We all know how I feel about that one.

If they are simply creating another fish out of story film, why co-op the title and tarnish the original? Will it just be a reboot where Whoopi Goldberg passes the baton, or perhaps her daughter will be the one needing to hide out.

I really shouldn't be too hard on Disney here as they are one of the few studios that are brave enough to bring an original film out in the Summer with last month's Tomorrowland. The film has underperformed thus far despite generally positive buzz and reviews, so perhaps Disney is realizing that they aren't being rewarded for their originality. Then again, this is the behemoth company that owns/distributes Marvel, Star Wars and Pixar so I don't think they'll end up at the poor house anytime soon.

Of course, remakes haven't exactly been burning up the box office either. The latest one Poltergeist underperformed at the box office and tarnished the good name of the original scare fest. Quickly browsing the lists over at BoxOfficeMojo, remakes generally don't perform that great. Sure, there is the occasional outlier ala War of the Worlds or Charlie and the Chocolate Factory, but for the most part these remakes fail to make back their budgets.

I'm sure Disney is looking at the success of Pitch Perfect 2 and making a rash decision to reboot their own singing franchise, but by the time the new Sister Act sees the light of day, audiences will be on to the next big fad.