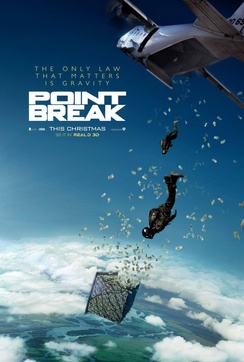 Why does Hollywood insist on remaking every single film ever made?

Sure, we haven't seen remakes of Citizen Kane or Casablanca, but it's only a matter of time, right? Let me be clear, I'm not anti-remake or reboot or whatever you want to call it this week, but it has to be done judiciously and only where it makes sense. Some films should never be remade in my opinion and films dated to a particular time and style are among them.

There's probably no greater late '80s/early '90s surfer culture film than Point Break. Likewise, I'm not a huge Keanu Reeves fan, but if there was one character that was particularly perfect for his blend of clueless goofiness and blank stare (save for Bill & Ted), it was Johnny Utah. Whoa.

Point Break wasn't a great film, but it spoke to a select few who quickly made it a cult classic. Having earned only $42 million at the box office and a little bit more worldwide, it hardly seems like a film that should have attracted so much attention for a remake. And yet, with the trailer for Point Break hitting the web yesterday, we find ourselves in a world with not one, but two Johnny Utahs and two Bodhis. Whoa.

Now this is a classic Point Break trailer.

"It's not tragic to die doing what you love. If you want the ultimate, you've got to be willing to pay the ultimate price."

"The only law that matters is gravity."

Yeah, the latter is missing the zen-like quality of the original quote which is essentially the heart of what makes Point Break a great American film. The Ex-Presidents couldn't care less about idealism or disrupting "international financial markets." They simply want to live their lifestyle to the extreme. In the new film, there's some sort of Robin Hood quality to the "extreme athletes" turned criminal gang.

Not only does the remake fall into the trap that everything must be super-sized, but it goes to ridiculous lengths to outdo the original film. So much so, that if this Bodhi faces his own Aussie waves from a 50-year storm at the end, I don't know if I'm supposed to automatically assume that he dies like in the original film.

Of course, I suppose that's the point. I mean, it was sort of hard to sequelize the original film when Bodhi dies at the end.

Of course, death is temporary for Point Break apparently. In case you blinked and missed it, go back and watch the trailer for the new film. Yes, at 39 seconds, that's none other than James LeGros aka Roach who died in the original film. Spoiler alert. And yet, now he's a big wig for the FBI and basically Johnny Utah's boss. Whoa.

And speaking of the FBI, since this group of Ex-Presidents (with updated motorcycle helmets with Bush and Obama?) has gone international, why does the FBI have any sort of jurisdiction here? And, part of the charm of the original film was Johnny Utah's introduction to this world of surfing culture, but now he's an equal with them from the get go? Ugh. Whoa.

I could go on, but I've already said more about this film than I ever wanted to. If you think this new version looks great and you can't wait to see it, please let us know below. I really want to know what you're seeing that I'm not.