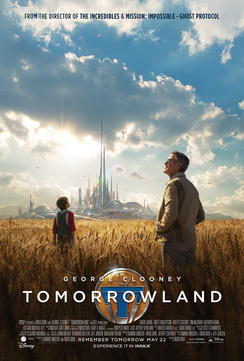 If I told you that the TV series Lost had gotten together with The Neverending Story on the sly and had a love child, would you watch it? That's the question the filmmakers behind the upcoming film Tomorrowland hope you answer in the affirmative.

Me? I was in when you said Lost, but I know how much the end of the series created a divide among fans. OK fine, the crevice was more like the size of the Grand Canyon, but Damon Lindelof is hoping that by teaming up with Brad Bird, you will learn to forgive and forget. Well, at least forgive.

Packaged as a family-friendly alternative to the bombastic blockbusters that will pile on destruction at the box office, Tomorrowland is hoping that you will sit through over two hours of film to experience what is shaping up to be one of the more unique and awesome films of the Summer. So far, the trailers have been all over the place simultaneously positioning the film as Sci-Fi, Adventure and Thrilling Suspense and yet I'm beginning to think that we haven't even begun to scratch the surface of the film.

This week, Disney released three clips that start to focus the film on its characters. The first one is pure Lost in its homage to seeking clues.

The next one focuses on leading youngster Casey, played by Britt Robertson.

And what about that Neverending Story feel? Is it me or does Athena remind you of the princess?

Tomorrowland hits theaters on May 22.