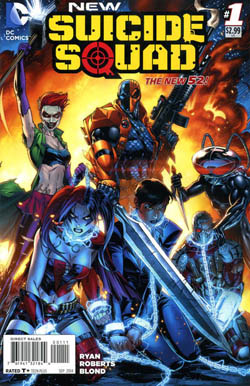 One film that is sort of being lost in the shuffle of all these comic movies is, perhaps, the one film that I'm most excited for, Suicide Squad. And to be honest, I don't really know that much about it.

What I do know though sounds amazing and I'm in. Way in. Like pencil to the eraser in.

If you caught the Dark Knight reference there (and really, how could you not?), then you would know that I'm talking about the DC comic film where the villains team up and do something heroic. Again, that's my general understanding of the film (which is naturally based on a comic book) and I can already see thousands of you cussing me out in effigy.

It's OK. I can enjoy comic book movies without reading the comic books just like many people enjoy movies based on books that they've never read. In fact, my favorite author is Chuck Palahniuk and I was introduced to him through the film Fight Club, but that book remains the only one of his that I have not read. I have this thing about the book ruining my enjoyment of the film on that one. I know, it's weird and yes, some day I will read the book, but for now, it remains unread.

I also know that the cast of Suicide Squad is top-notch with the likes of Will Smith, Jared Leto and Margot Robbie all playing a villain. Leto has the "honor" of stepping into the shoes of Heath Ledger as The Joker, while there are unconfirmed reports that Ben Affleck will reprise his role as Batman for the film.

There is one notable omission in the photo though with Jared Leto or the Joker nowhere to be seen. Hmm, I think this one is just getting interesting.