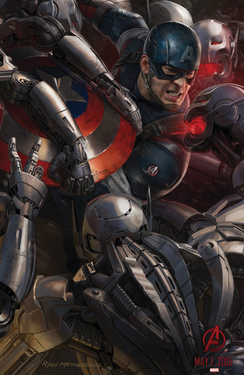 If you're the ultimate Marvel fan boy, you will get your chance to prove it on April 29. On that date, if you so choose, you can embark on a journey that Marvel is calling the "Ultimate Marathon," all 11 Marvel Cinematic Universe (MCU) films shown back-to-back.

Starting with 2006's Iron Man and ending with the premiere of Avengers: Age of Ultron, the total film watching marathon will take over 27 hours to complete, but it does come with an Avengers medallion that you can wear as a badge of pride in front of all of your friends. All jokes about hygiene and geeks in the dark aside, this does actually sound like a pretty cool way to get boned up on your Marvel knowledge before the latest film debuts.

Here is the complete schedule:

Phew! That's a massive slate of films and yet, I'm tempted and intrigued by it. Of course, the wife will need a lot of cajoling and convincing to be stranded with the kids for such an extended period of time, but I haven't seen about half of them on the big screen.

If 11 films are too much time in a dark room for you, there's good news. Chains such as Cinemark have already announced an Avengers double feature to fulfill your team up wishes and desires.

If this news excites but more about a galaxy far, far away, I wouldn't get my hopes up for any Star Wars marathons in December. I mean sure, it makes complete sense, especially if this Marvel marathon is successful, but there are existing rights issues. Disney owns everything Star Wars related except for A New Hope completely and the distribution rights to the first six films (they revert back to LucasFilm/Disney in 2020).

Basically, that means that if Fox wants to re-release the original and prequel trilogies, they are the sole decision maker and what incentive would they have to help Disney market The Force Awakens? Well, that's where negotiations come in to play and nothing is impossible, but I find it highly unlikely that they'll be able to come to a settlement before Episode VII hits theaters.

I'd love to be surprised though and I'd definitely pay to see that marathon. Of course, what order will they show it in? Let me know what you think about these mega marathons in general and Marvel's Ultimate Marathon in particular.

Would you sit and watch all of the Star Wars films back-to-back?