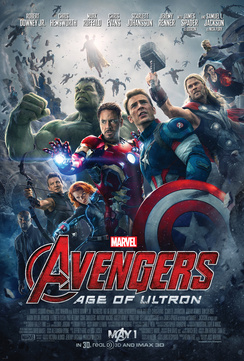 Marvel released the third trailer for Avengers: Age of Ultron today nearly two full months before its May 1 release and finally we get the emotional payoff we have been waiting for. The first two trailers focused heavily on Ultron naturally and the raucous action sequences that we have come to expect from the Marvel franchise, but this one really strikes an emotional chord.

The plot isn't that complex, but the trailer does a good job of filling in the blanks for those late to the party. Robert Downey Jr.'s Tony Stark has unintentionally created an evil Artificial Intelligence (A.I.) and this abomination (Ultron) is threatening to destroy The Avengers, humanity and the planet in one fell swoop. There are new characters in Scarlet Witch (Elizabeth Olsen) and Quicksilver (Aaron Taylor-Johnson) who start out fighting alongside Ultron before switching allegiances to the good guys. Well, at least we definitely see Scarlet Witch fighting with The Avengers.

Of course, that could be backwards and the twins could end up being betrayed by The Avengers and siding with Ultron at the end. Don't you just love comic book movies?

The real breakthrough in this trailer though is the contrast between the very human moments between Black Widow and The Hulk while the boys contemplate their own mortality in the face of daunting odds. This seems like a pretty obvious and fun choice by director Joss Whedon as the lines are clearly delineated between human and machine.

Of course, the further question that I'm sure will be tackled in future MCU films and is just now getting the full treatment on Marvel's Agents of S.H.I.E.L.D. concerns the differences between natural humans and these modified/alien superheroes that are putting their very existences on the line for humanity.

To complicate matters further, the trailer ends on our first glimpse of Vision, which will most likely serve as the bridge between The Avengers and humanity going forward. Vision's cold, reasoned logic will be the undercurrent of the franchise moving forward much like Spock or Data was for Star Trek.

In other words, I'm on board for the long haul. Let's go May, please get here sooner.