'Birdman' soars high at the Oscars 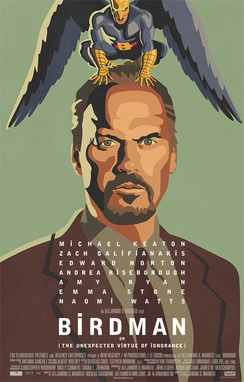 In what was one of the most anticipated Academy Awards show in many years, Hollywood did not disappoint. Of course, the curiosity was not about the actual winners as there were truly very few surprises, but in what to expect from first-time host Neil Patrick Harris.

In a nutshell, NPH started out with a bang, hit a few lulls in the middle, but finished strong. It seems that much like the show as a whole, the reviews were quite mixed. You either loved NPH or hated him and through a very informal sampling of responses on Twitter, the reaction was mixed throughout the show. Of course, what else do you expect when you get such a diverse crowd of people turning in to see the biggest awards show of them all?

The big winner of the night was (unsurprisingly) Birdman with four wins, including Best Picture, Best Director and Best Director. Writer-director Alejandro Inarritu won the trifecta taking home three statues for his film about an aging Hollywood actor trying to mount a comeback.

The level of realism in Birdman was enhanced by Michael Keaton's performance in the lead role that often times blurred the lines between art and reality for the aging actor who is enjoying a career renaissance of late. Sadly, the comeback wasn't capped with an Oscar for Keaton, who lost the Best Actor award to Eddie Redmayne for his performance of an ailing genius in The Theory of Everything, but there was something great about seeing Keaton on stage for the final award taking in all of the well-deserved revelry.

The night's other big winner was The Grand Budapest Hotel which also took home four statues and got out to an early lead with wins for Best Makeup and Best Original Score. The Wes Anderson-directed film was shut out of the top awards, but you wouldn't have been able to tell by seeing the genuine joy in Anderson's eyes as his crew won award after award.

The biggest snub (after The Lego Movie not even being nominated for Best Animated Film) was the lack of love for Boyhood. Thankfully, Patricia Arquette's win for Best Supporting Actress prevented it from being shut out completely, but this was supposed to be a night where Boyhood and Birdman dueled and the result was as lop-sided Colts-Patriots playoff game a few weeks back (sorry Tim).

Speaking of The Lego Movie snub, I think it's fair to say that the filmmakers got their revenge by absolutely stealing the night with their performance of the Oscar-nominated song "Everything is Awesome." For a few brief moments, we were transported from the stuffy Academy Awards to a land of fun where, well, everything is truly awesome. From Lonely Island to Will Arnett reprising his role as Lego Batman, the performance was a true spectacle that included everything from confetti cannons to lego Oscars handed out to random audience members (hello Oprah).

Ultimately though, the show was as predictable as its results. It ran way long with several ups and downs along the way. The running gag from NPH about his locked box of Oscar predictions did have an amazing payoff, but given that the show was already over 30 minutes behind at the time made it feel rushed. Seeing NPH bare his soul, and tighty whities, in a nod to Birdman was bold and daring and easily the most impressive display of a host going for it since, well, forever.

Of course, I could have done with less pithy one-liners. They seemed contrite and were unwelcome at best from the audience at the Dolby theater. Of course, Robert Duvall's death stare was one of the most hilarious bits of the evening, so there's that. Apparently, Lady Gaga did a stirring medley of songs from The Sound of Music, but I wouldn't know because that part of the show was dragging so much that I nodded off and missed it. Thank the Internet for replay because that was a moment that I would have been loathe to miss completely.

I will never get the "In Memoriam" section of the Academy Awards. I mean I get the purpose and I agree that it's important to recognize those that have past away and to celebrate their contributions to film, but it just never seems to get it right. Take this year, for instance, the caricatures they used really bore little resemblance to the people themselves. I had to rewind and watch that part again because the first time through I was certain they had forgotten to include Robin Williams.

On the second time through, I finally spotted him but I still don't see the likeness at all. They did leave Joan Rivers off the list which was a bit glaring despite her only acting in a handful of roles. Suffice to say, she put in enough red carpet time in her life to deserve a better treatment than that. And then, when it was over, they had Jennifer Hudson sing a sad song about never letting go.

It just made a long night even longer and that's the problem with the Academy Awards. It's a case of having too many cooks in the kitchen to the point where the show has become a bloated beast that has outgrown its entertainment value. Instead of talking about the poignant and awe-inspiring speeches given by winners Patricia Arquette and Graham Moore among others, we are talking about the non-essential parts of the show.

That's the one thing that longtime host Billy Crystal always seemed to understand. There's a delicate balance between entertainment and boredom and when all else fails, get the show moving. Predictably, the end was rushed with last four biggest awards given out in something like 10 minutes.

I think Neil Patrick Harris did an admirable job in his first swing at it and I only hope that producers give him more control and leeway going forward if he's brought back to host. The night seemed to be charged with politics with everything from gay rights to women's rights to racial equality being bandied about so let me borrow a line or two from that world.

Keep it simple stupid (KISS). The show should start at 8:00 Eastern and should be over in three hours. There are only 24 awards and there are creative solutions to getting the awards handed out in a timely fashion where the emphasis is on the awards and the winners' speeches and not all of the pomp and circumstance.

Here are all the winners at Sunday night's Academy Awards.