'Boyhood' is all grown up with Golden Globes wins 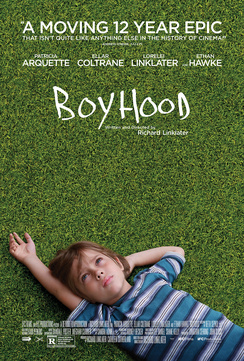 As much as we hold the Academy Awards above all others in terms of pomp, circumstance and all that prestigious malarkey, there's just something cool about the Golden Globes. Personally, I think it's all the alcohol flowing combined with the fun mix of TV and film celebrities.

Did I mention the alcohol?

There's just something infinitely cool about seeing former host Ricky Gervais come out to present an award with a pint of beer in hand. It was only topped by him having to set the pint down on the stage so that he could open the envelope and announce the winner.

As much as I'm looking forward to seeing Neil Patrick Harris host the Oscars this year, it's just a different beast altogether. It seems that Hollywood Foreign Press Association really knows how to throw a great party and the winners usually coincide with its laissez-faire attitude. As a predictor of Oscar glory, it's pretty middle of the road with about a 50% success rate.

But, who cares? Really, it can get a bit boring if the same films or actors win all of the awards. Spreading out the acclaim before the Oscars only heightens the anticipation for the biggest awards show of them all.

As for the Golden Globes, the celebrities stole the show yet again with their quick wit and alcohol-induced acceptance speeches. Jeremy Renner probably won the show with a fast improvisation that said what we were all (mostly all) thinking.

Of course, that wasn't the only verbal sparring to take place last night. Co-hosts Tina Fey and Amy Poehler touched on the Bill Cosby controversy with a couple of ill-timed jokes that didn't really seem to find an audience. Ricky Gervais was his usual snarky self and all of Hollywood's stars took cover when he hit the stage and started calling them out by name.

Cecil B. DeMille honoree George Clooney was all class in his acceptance speech. He was most complimentary of new wife Amal and really seemed to be smitten which was a nice departure from his usual stoic stance on the fairer sex. Whatever spell she has him under, it's working. Of course, Amal is quite the catch in her own right, so perhaps it's just another case of two amazing people finding each other.

Well, I suppose I should recap the actual award portion of the night, eh?

Boyhood certainly won the evening with three wins including Best Picture, Drama and Best Director for Richard Linklater. Birdman is the odds on favorite to compete for Boyhood at the Oscars as it won two Globes of its own including one for Michael Keaton, Best Actor in a Motion Picture, Musical or Comedy.

As I mentioned there were a few upsets along the way, mostly on the TV side where venerable shows such as True Detective were shut out despite four nominations. On the movie side, surprise wins by Julianne Moore and Patricia Arquette leave the Oscars race wide open. Of course, we will get more clarity on that when the Academy announces their nominations on Thursday.

The full list of winners are in BOLD below.

Best Actress In A Motion Picture, Musical or Comedy

Best Actor in a Motion Picture, Musical or Comedy

Best Actress in a TV Series, Musical or Comedy

Best Actor in a TV Series, Musical or Comedy

Best Actress in a Mini-Series or TV Movie

Best Actor in a Mini-Series or TV Movie

Best Supporting Actress in a Series, Mini-Series or TV Movie

Best Supporting Actor in a Series, Mini-Series or TV Movie