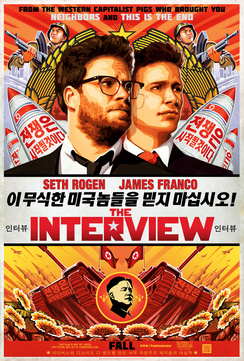 This week is a curious one in the entertainment industry. Actually, the last two weeks of the year have typically been some of the slowest times of the year as Hollywood virtually shuts down to celebrate the holidays and reflect upon the past year.

This year is really no different, although I'm betting that the IS departments in many studios are working overtime this year to insure that another Sony hack type of incident doesn't happen at their studio. The last year has been an interesting one in many ways as we find ourselves at a crossroads of sorts in terms of how we choose to consume our entertainment.

And yet, we stand at a precipice of what could be the highest grossing year of all time and theaters with several high-profile releases due out in 2015. The future is bright and these are indeed curious times and we've got your front-row seat for everything that is set to happen between now and then.

First though, it wouldn't be a fitting last MM of the year if we didn't at least try and pay respects to the year that was 2014. Tim and I actually did something a little different this year. In what we hope will become an annual tradition, we tried to come up with a "year in review" piece that had our unique spin on things. We hope that you enjoy it.

Now, that 2014 has been properly roasted, it's time to put the bow on the final weekend at the box office and about in Hollywood.

Do you feel that? That undeniable shift in the entertainment landscape that was felt over Christmas in lieu of an North Korean attack on movie goers?

No? Well, don't feel so bad. Despite what many might claim, The Interview did not revolutionize entertainment distribution. But, we'll get there in a moment, first let's talk about those films that played in wide distribution over this past weekend.

In terms of new releases, it was a virtual tie between Unbroken and Into the Woods. They both grossed over $31 million this week, good enough for second and third place respectively. Both films have grossed about $47 million since their Christmas debuts.

The repeat winner was the Peter Jackson swan song to J.R.R. Tolkien The Hobbit: The Battle of the Five Armies which took in another $41.4 million this week to easily hold onto the top spot. The film has earned a total of $168.5 million thus far and looks on target to hit our projection of $260 million.

Elsewhere, there's an interesting battle still to be decided between Guardians of the Galaxy and The Hunger Games: Mockingjay Part 1 for the box office crown of 2014. Currently, Guardians of the Galaxy sits in the top spot with $332.5 million but Mockingjay topped the $300 million mark this past weekend with its $10 million bounce back weekend. The question is can the film continue to hold that momentum through the New Year's holiday?

If so, then there's a good chance that despite earning the least of any of the The Hunger Games films, the penultimate film might still finish in the top slot of 2014.

Don't worry, we didn't forget about The Interview. The controversial film from Sony did, in fact, open up on Christmas Day, but in only about 300 independent theaters. Despite solid audience figures, the limited release only earned about $2.9 million. Although, I'm sure the figure that you're all hearing is the $15 million that the film earned from digital distribution since its release on December 24.

While that number sounds impressive (studios don't typically release digital numbers, so it's hard to compare the performance with other titles), there's more going on than meets the eye. The film was available to rent at the price of $5.99 and to own for $14.99. Sony also disclosed that the film was viewed over two million times, so for the math to work that means that about 85% of the total number of views were rentals.

For comparison sake, the 90% rental results in revenues of $13.8 million and the 80% rental results in revenues of $15.6 million. I'm sure a math whiz out there can fine tune the numbers, but the general sense is that people didn't rush out and buy a digital copy of The Interview. To me, that's a pretty big endorsement of the argument that ownership remains firmly rooted in physical goods. The true test of this idea will be when Sony brings it out on DVD and Blu-ray later in 2015.

The one major drawback of the digital numbers released by Sony is that there is no way to quantify how many eyeballs actually saw the film. Currently, Box Office Mojo estimates that the average ticket price to see a film in theaters is $8.12. That means that if there was a true one-to-one relationship in terms of digital purchases of The Interview, then those two million people would have earned over $16 million at the box office, which would have been close to the $20-25 million projections that experts figure the film would earn before the controversy.

But obviously, most of those digital purchases were probably seen by more than one person. Even at a conservative estimate of say three million people, that would have been a box office take of $25 million. In other words, that $15 million might sound like a big number, but it's no where near what it would have earned at the box office. Also, I'm willing to bet that the drop off in terms of digital purchases will fall off far more quickly than the box office would have.

The bottom line, you won't be seeing films skipping out on theaters and hitting the digital wave any time soon. However, this performance does prove that people are willing to wade into the digital waters for an event type of entertainment. That's where I think you'll see studios attack digital distribution premieres in the future. Think Direct-to-DVD or DVD Premieres from the past that brought us such wonderful fare as The Dukes of Hazzard: The Beginning and Ace Ventura Jr.: Pet Detective.

Although, I do think there is potential for studios to exploit this avenue. Some films will always be better seen in theaters. No one will argue that Michael Bay's films should be seen on TV over a theater if, you know, you're into that sort of thing. Likewise, some films, would probably do better at a lower cost than you'd find at theaters. Dumb and Dumber To seems like the perfect film that could have possibly become an event release that would have better served in the digital realm than in the theatrical one.

Again, there's no accounting for taste in this one.

There seems like there was so much more that I wanted to hit on, but I spent so much time on the stuff above that I'll spare you the rest. Happy 2015! From Tim and I, we both hope that your new year is better than the one that will end later this week.

Until next year, Mix Well!