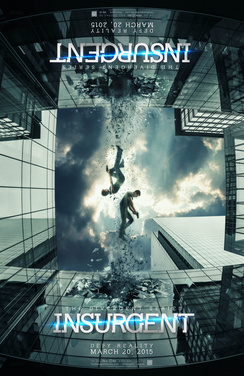 We all know that J.J. Abrams loves his mystery box, but it appears that the writers who adopted Veronica Roth's second book Insurgent also love their mystery boxes. As you will see in the trailer below, a quite literal mystery box is the MacGuffin upon which the whole trailer and by extension the whole film revolves.

What's in the box? Why is Jeanine obsessed with it? Why does she think that only Divergents can open it? And why does Tris suddenly have pixy short hair? All of these questions are important and they also share another commonality, none of them are in the book.

That's right, it seems that while Divergent was mostly faithful to the first film, this second film is going back to the drawing board. And what they've come up with is basically The Matrix with kids. Heck, they even have weird wires that port into their bodies, which, again, weren't in the books.

Of course, that's not to say that this direction isn't more cinematical. Hell, I'm dying to know what's in the box and I have a pretty good idea what it is, but if that turns out to be true and the entire supposition upon which the third and final book (which naturally will be two movies) is completely disproven. If Jeanine doesn't know what's in the box, then it gives them wiggle room to paint her as a sympathetic character, and if they do that, hell no. Nope. I'm not going to watch it.

All in all, the trailer is certainly more action driven than the first film and it looks like there is a real plot instead of the hundreds of pages of exposition that was Insurgent the book. We get it, what's in the box is a game-changer and so was the end of Insurgent, so I'm guessing that Veronica Roth is cool with the changes.

Of course, it does make you wonder what liberties they are going to take with the final book/films. The ending of Allegiant was roundly criticized by die-hard fans, which is funny because I actually rather found it fresh, fitting and a good way to end the series. Oh well, we only have like three more years to find out.