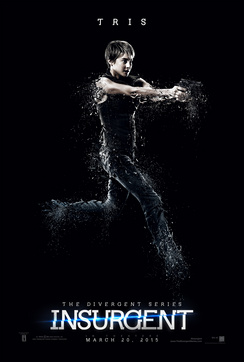 Change is one of the many themes in Insurgent, the second book in the Divergent series. From the looks of today's first trailer for the film, it would seem that the second movie is playing along with that theme.

The trailer is obviously set all within one of Tris' fearscapes where the laws of physics and gravity are merely suggestions and not absolute laws. The first thing that you will notice is the short locks on Shailene Woodley. This isn't that surprising since the actress has been sporting the short hair look for awhile now, but in the books, I don't recall any mention of Tris cutting her hair. Interestingly though, the move does fit her character and the arc of the story, so why not? It's surely better than trying to match up shots with all of the pratfalls that are inherent in wearing a wig.

The clip is short, but it definitely sets a distinct tone for the film. The visuals look to have gotten a nice upgrade over the first film and that's definitely a plus given where the story is going in the third book (third and fourth films, naturally). If you're a fan of the books, you'll enjoy the tease and if you're on the fence about the series, I think the trailer will rest your mind that the slight disappointment of the first film was an anomaly.

Insurgent hits theaters on March 20, 2015. The real question is whether the film will perform well enough for us to see the concluding films in the series, Allegiant, Part 1 and Allegiant, Part 2 due out in 2016 and 2017 respectively.