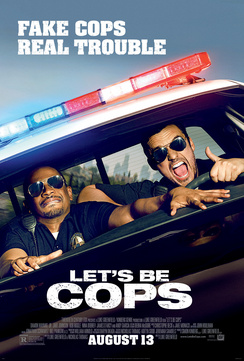 Is it me or is August officially the worst month in all of sports? I mean sure, if you like little league baseball, there is a great story developing over at the Little League World Series, but otherwise, it's just a sports dead period.

The Pennant races (do they even still call them that?) haven't quite started to heat up yet and the inclusion of two wild card spots for both the American and National League makes it a little less dramatic. Sure, it's not hockey where more than half of the league makes the playoffs, but after 162 games, do we really need a one game play-in?

Sorry, I've gone a bit way off the reservation for that one, but August really is a lost month when you think about it. So, given that, wouldn't it make sense for Hollywood to turn to August as the unofficial extension to Summer?

If this year is any indication, I think it's safe to say that Hollywood is catching on. Not only do we have strong titles performing like the peak Summer blockbusters they are, but we also have a few surprises that are poised to take August over the $1 billion mark for the first time ever.

Looking ahead to 2015, we already know that the entire year is loaded, but August is looking rather robust with the next Bourne film, the video game adaptation Assassin's Creed and the Point Break remake. But that's really getting ahead of ourselves. First, let's kick back and enjoy this week's MM.

This weekend was supposed to be the weekend in which The Expendables proved once and for all that it is a force to be reckoned with, but instead, The Expendables 3 opened with $16.2 million and more questions than answers. Although perhaps, the real answer here is that interest in the series is waning.

After the original film opened up with a shocking $34 million, the sequel was only able to muster $28 million en route to an $85 million total. So, I suppose the $16 million opening shouldn't be a surprise as it actually fits the trend. Of course, there are mitigating factors such as a strong month this year and the direct competition from two action hits in Teenage Mutant Ninja Turtles and Guardians of the Galaxy.

At this pace, The Expendables 3 will struggle to make it to $50 million and all of sudden this once viable franchise might find itself on its last legs. Ironically, the frnachise's last and best shot might not even come on the back of founder Sylvester Stallone. Next year, the spin-off Expendabelles will look to see if the formula for success can work (or be improved) by focusing on aging female action stars.

They might be on to something as the lack of Gamora merchandise is one of the only flaws being aired about the runaway Marvel/Disney hit. It does appear to be a legitimate concern as a quick peek at the Guardians shop page over at Marvel.com reveals that Gamora is noticeably missing from the Guardians of the Galaxy team shirt and the only shirts featuring her are of the "Create Your Own" variety.

This news comes on the heels of Disney saying that it had "no plans for Leia products at the Disney store" back in May. A comment that was met with significant derision and backlash from social media. So much so, that Disney backed off from those comments and announced that Leia merchandise would be coming to their stores.

Both of these incidents follow the great Frozen merchandise shortage of early 2014 and that makes you really wonder how could a company so large as Disney continue to make merchandising missteps of this magnitude? Let's face it, merchandise is the bread and butter of Disney and one has to wonder if these are just simple miscalculations or are there more nefarious plans in place?

As I never shy away from a good conspiracy, I could easily buy into the argument that Disney is quite happy to sell traditional gender roles so that little girls continue to support their Princess franchise while little boys play with their Star Wars lightsabers and comic book movie figures. There's only one problem Disney, this isn't 1950. My daughter will not be shoe-horned into a gender role simply to line your pockets and that's the real head-scratcher.

Disney is actually losing business and making less money by not having Gamora or Black Widow merchandise. With DC and Warner Bros. readying Wonder Woman, it will be very interesting to see what choices they make in their merchandising for Batman v Superman: Dawn of Justice. I have a feeling that we will be seeing Gal Gadot on just about everything under the moon.

Sorry, I'll get off my little soapbox now. It was just something that bugged me this weekend and I needed to get that off of my chest. In other news, Guardians of the Galaxy kept its second spot at the box office and through three weeks has earned over $222 million. At this rate, it has surpassed Thor: The Dark World and will overcome Captain America: The Winter Soldier in a couple of weeks. It should end its run with over $280 million.

I'm a bit shocked that Teenage Mutant Ninja Turtles held onto its top spot with $28.4 million. The film has grossed $117.6 million and looks set to make a real push towards $175 million. That's crazy in my book, but cowabunga, dude!

The real surprise of the weekend was the little film that could Let's Be Cops. The comedy starring personal favorite Jake Johnson and Damon Wayans Jr. made off with $17.7 million for the weekend and has grossed a total of $26.1 million since its Wednesday opening. What is interesting about the film and its performance, from a purely sociological perspective, is that it opened in the middle of the Ferguson protests in which public scrutiny of police and brutality is heightened.

I've already had one soapbox moment today, so I won't get up on another, but feel free to tackle this issue in the comments.

For those unfamiliar with the Ice Bucket Challenge, it is a fundraising campaign for the ALS Association that has quickly become a viral Internet sensation. In the last few weeks, celebs, athletes and everyday Joes like you and me have taken the challenge and raised more than $15 million for ALS research.

Here is a little video that explains it all.

Here are some of the better ones. Chris Pratt - He does a little twist on the challenge.

Nina Dobrev - She stars in Let's Be Cops and well, she's a trooper.

Bill Gates - He has his own way of doing it, naturally.

Charlie Sheen - He put a monetary twist on his challenge and a chance to get back at his Two and a Half Men compadres.

Kaley Cuoco - She turned it into a wet T-shirt challenge. Sort of.

Tom Hiddleston - Loki actually does turn it into a wet T-shirt challenge.

Even Oprah took the challenge...

But sadly, Uma has not. Who are some of your favorite ice bucket challenges? We haven't been challenged yet, but you can donate to this worthy cause at their website.

That's all for this week, until next week, mix WELL!