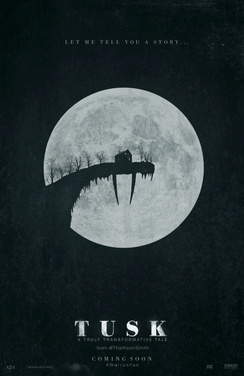 Kevin Smith turns 44 on Saturday and he "retired" a few years ago, but the man who is quickly becoming one of the most endearing entertainers of our time is busier than ever. As fans of his work since the early Clerks days, this is music to our ears.

The self-proclaimed "Clown Prince of Comic Con" did not disappoint this weekend at his annual Hall H performance/convocation. While yes, the headline of his talk was the trailer debut from his latest movie, in true Kevin Smith fashion he dropped little nuggets of information to those paying attention.

We will get to them in a moment, but first we can't bury the lead. Tusk is an unabashed horror film with a few trademark Kevin Smith witticisms sprinkled throughout in which a podcaster comes face to face with his own humanity while confronting an "Old Man of the Sea" who is hellbent on turning him into a walrus.

Kevin isn't shy about (aboot?) admitting that there are obvious threads to The Human Centipede and The Island Of Dr. Moreau, but I have a sneaky suspicion that there's more than meets the eye, to steal a line from the '80s. And there's a whole trilogy coming, but more on that in moment.

Seriously though, when is Michael Parks going to get his Oscar? Not since Anthony Hopkins in The Silence of the Lambs have I ever been so terrified of a simple, non-sensical slurping noise. Say what you will about the trailer itself, one thing is certain, this film will be messed up and Parks will mesmerize you with his craft.

The one main critique that my colleague Tim has pointed out is the absolute smarminess of Justin Long's character. He's plain unlikable and as such, we are left uncaring as to his ultimate fate. Personally, I think that this intentional on Smith's part. We aren't cheering for Justin Long as much as we are going to be utterly appalled by what Parks does to him.

I may even further surmise that as Justin Long's transformation into a Walrus progresses, he is confronted with his own faults as a human may even transform himself into a better person as a walrus than he ever was as a man. How's that for an ironic shift in the third act?

The trailer was like cherry on the poutine sundae that was "The Musk of Tusk" talk at Comic Con. The good stuff was underneath perhaps hidden under a layer of brown gravy and cheese curds. What's even better is that you don't have to take our word for it, you can listen to it all right here.

The cutest part (and yes, there was a cute part in a Kevin Smith Q&A) was when a 9-year-old girl got up and asked him if he was ever going to make a movie for her to see. Instead of going for the easy out and saying that Jersey Girl was his ode to being a father to a young daughter and that with its PG-13 rating it would be (almost) age-appropriate and accessible to her, he decided to drop some news about upcoming projects.

The first nugget was the knowledge that Tusk will be the first film in a Canadian film trilogy that Smith is calling the "True North Trilogy." The "True North" probably refers to the corresponding line from the Canadian National anthem. The second film will be Yoga Hosers, while the last film will be something called Moose Jaws.

If you're thinking that you'll have to wait years between films, then you would be wrong. They are already in pre-production with filming expected to being next month.

Spent the day in the YOGA HOSERS production office! Pre-pro has begun! Within a month, we start making the weirdest flick I've ever made...

The interesting thing about these films as a collective is that Smith said at Comic Con that he wants to paint Canada as the "Texas of North America" where weird and odd things happen. To prove that point, he went on to detail that Yoga Hosers would be a movie in which two fifteen year-old girls would the protagonists and they fight supernatural powers or forces.

He claimed that he was aiming for a PG-13 with Yoga Hosers and hoped that it could be a powerful and strong film to connect with women after lamenting that he and his own daughter often had trouble finding films to watch together with strong female protagonists when she was growing up.

It's funny that he mentioned his daughter Harley Quinn Smith because you may have glossed over her in the trailer for Tusk. She was one of the clerks (and no, the irony of that casting doesn't escape us) that quipped that she hated American guys. The other clerk standing next to her in that scene is none other than Lily-Rose Melody Depp.

A friend is a person with whom I may be sincere. Before him I may think aloud. pic.twitter.com/2sayJG1r3w

And yes, she would be the daughter of noted actor Johnny Depp making her big screen debut in Tusk. Of course, this just lends even more credence to our assertion that Johnny Depp is playing the role of Guy Lapointe in Tusk, which Kevin has not yet confirmed publicly to our knowledge, but a recent Hollywood Reporter article that Smith tweeted listed the elder Depp as being in the cast.

After a bit of digging, it seems that Kevin dropped a little nugget about Yoga Hosers while he was overseas in England. He claimed that Yoga Hosers is a Tusk spin-off that follows "two characters in a convenience store in Tusk that you see for five minutes."

By the powers of deduction, that would mean that Yoga Hosers will follow Harley Quinn Smith and Lily-Rose Melody Depp as they do battle against supernatural forces. He also mentioned that an additional character from Tusk would appear in Yoga Hosers and that most of the cast would be back playing different roles. Sounds good to me.

As for Moose Jaws, we know that Kevin is in the middle of writing it and that it's basically Jaws with a moose. Oh, and there's a scene of a moose eating a 9 year old boy out of a lake. So, it's safe to say that Moose Jaws will be heading back into Smith's more comfortable R-rated territory.

There is no word if any part of the film will take place in or about Moose Jaw, Saskatchewan (as made famous in the hockey film Slap Shot) but here's hoping. Further out, Smith is also working on Clerks III, Anti-Claus his Krampus anthology film and Hit Somebody, the hockey film turned mini-series that helped to spawn the "True North Trilogy."

In other words, Kevin Smith is more active in retirement than he's ever been and that suits us just fine.