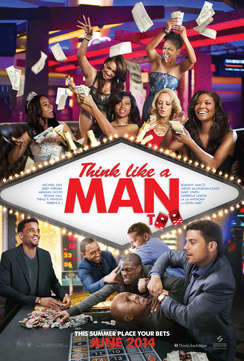 I just knew that this weekend was brewing up to be one for the ages. After the remarkable comeback and then heart-breaking tie at the World Cup for Team USA, it just felt like this mornings MMM would be epic.

To be honest, it's not THAT epic, but it is pretty interesting. There were a lot of things boiling over in Hollywood this weekend and the box office did something that's really hard to do during the Summer.

All told, the weekend was sort of eclectic and wild, much like the Summer Soltice which was also celebrated this weekend. You just knew that with all of this light out there, something magical would happen. And we weren't disappointed.

First up though, let's tackle this bizarre box office conundrum.

$150 million. That's sort of the Mendoza Line (yes, there will be a plethora of sports terms sprinkled in liberally in this week's MMM to keep in the spirit of the World Cup) when it comes to Summer box office weekends. If the top 12 films in any given weekend in June or July fail to cross that threshold, then you know that you're in trouble.

The top 12 films this weekend combined to only gross $142.6 million. To put this into perspective a bit, nine individual films (mostly Summer releases) alone opened for more than that amount. And yet 12 films combined failed to break $150 million.

Many will point ahead to this weekend when Transformers: Age of Extinction is expected to open to over $100 million as the reason for this weekend's drought. Sort of the "quiet before the storm" philosophy leading many people to seek out active, outdoor festivities this weekend knowing that they will be shuttered in a dark movie theater next weekend. I guess that's as good an argument as any, but personally I just think it was the dearth of strong films at the box office.

Think Like a Man Too was the top new film and it was rewarded as such by a narrow first place victory at the box office to the tune of $30 million. The sequel found itself caught between two behemoths in the aforementioned Transformers and last week's 22 Jump Street and just failed to ignite its core audience. In fact, the opening was actually a few million dollars less than its predecessor's, despite the suddenly hot-movie property that is Kevin Hart in the lead.

Speaking of 22 Jump Street, it held on remarkably well at $29 million and just barely missed out on first place. The sequel of a TV series adaptation is now up to $111 million and change. Sure, the increased competition will hurt, but I still think this film will come close to that magical $200 million number. I guess there's no accounting for taste after all.

The weekend's only other wide release was the Clint Eastwood-directed adaptation of the Broadway musical Jersey Boys. There's just so much wrong with that previous sentence. The true story behind the formation and success of the iconic 1960s group The Four Seasons only made $13.5 million in its debut.

Many critics panned it as failing to define itself as a true musical or bio flick and it seems that confusion carried over to the general public as well. The film will struggle mightily to get to $40 million and perhaps that's a blessing in disguise. I'm sure Clint Eastwood will be happy to have this whole business behind him so that he can focus on films that are more in his wheelhouse than this one.

Everyone knows that hockey and film are two of my main pursuits, but fewer still know just how big of a Pearl Jam fan I am. We're talking fan club since 1994 big. We're talking traveling to other countries to see them big.

So imagine my surprise and dismay when I came in this morning and was literally inundated with this snippet from Pearl Jam's concert in Milan, Italy on Friday night. Yes, that's Eddie Vedder singing a small (thankfully) part from "Let it Go" as featured in the smash Disney animated hit Frozen.

Man, this one concerns me. Even with his past association with director J.J. Abrams, I figured that the chances of seeing Tom Cruise in a Star Wars film were slim to none. Is it odd that I suddenly have an urge to get George Lucas back involved with this trilogy?

I come in somewhere between Robert Downey, Jr. and Johnny Depp, so at least I'm in great company.

In response, the Looper writer and director tweeted out the following, a classic clip from the film The Right Stuff.

That day has finally come, sort of.

What a weekend. Until next week, MIX WELL!!