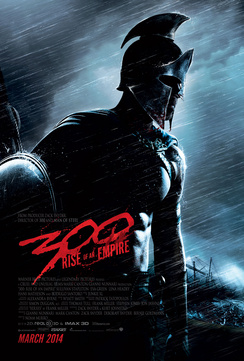 Now that would be entertaining, no? Think about it. All those Greeks fighting valiantly against insurmountable odds only to rise again once they have vanquished their mortal soul.

It's one thing to defeat a small squadron of Spartans, but it's another thing entirely to destroy their walking dead zombies. You know there has to be a studio head somewhere out in Hollywood thinking the same thing.

And it wouldn't be the oddest story in Hollywood this week, and the week is only a few hours old.

Such is life in and out of Hollywood. We live, we die, we rise again... as blood-thirsty zombies. It's a tale older than time itself. Speaking of Son of God, it also did well this week.

OK enough with the zingers. I know that we had unintended MMM absence last week and for that I'm truly sorry. There's this whole thing in the South about ice storms. Apparently, when it's 80 degrees one day and snowing the next, that spells doom and gloom on this side of the Mason-Dixon line.

As a born-and-bred Northerner, I mostly scoff when they cancel schools down here at the threat of snow, or whatever it is that they have down here that passes for the white stuff. But this time something was different. It took only one news report of a 12 car pileup on the way to work to tell me that it just wasn't worth it.

You can't teach a whole city to drive in the white stuff in one night. So, the unexpected snow day left me unable to reach out and chat about Non-Stop and Liam's undying popularity among the action film set.

That's ok, I think you can probably read between the lines and see the oozing sarcasm for yourself. But this is a new week and with it comes new opportunities and a fresh crop of new films to poke fun at. So, sit back, grab a cup of your favorite beverage and enjoy this week's installment of the MMM.

The film that nobody claimed they wanted to see, but went to go see it anyways opened up this weekend and it dominated. 300: Rise of an Empire debuted with $45 million, but it failed to even come close to its predecessor's $71 million opening during the same weekend in 2007.

Maybe it was the audience growing tired of 3D or the fact that the visual style is no longer as novel as it was seven years ago, whatever it was, the sequel still outperformed recent comparable titles and when it's all said and done, should end up with a nice and tidy $140 million. Not bad for a sequel to a movie where almost the entire cast dies and the director opts instead for the producer's chair this time around.

Unfortunately, DreamWorks sunk a lot of money into this film and it was hoping for an opening weekend haul more in the range of $50 million. It seems that the nostalgia angle didn't kick in enough to convince parents who grew up on the cartoon to introduce their kids to the franchise. The good news is that there's nothing animated on the horizon until Rio 2 opens up next month. The bad news is that family-friendly Muppets Most Wanted opens up next weekend.

Still, with a decent word of mouth, Mr. Peabody and Sherman should be able to cross $100 million before its run is over. Speaking of box office milestones, the aforementioned Frozen is getting frightening close to the massive $400 million box office number. With its $3 million in receipts this weekend, the wildly popular Disney animated film sits at a total box office of $393.1 million.

The big question remains, does it have enough juice left in it over the next week to break that huge milestone before it hits Blu-ray and DVD next Tuesday. While I want to cheer for the underdog, I think it will finish up just shy of $400 million at $397 million or so. Still, that's a great, unexpected win for Disney making it the third highest grossing film released in 2013 and top animated film of the year.

Well, the fact that Carrie will be back isn't Earth-shattering news as she's pretty much been telling anyone that will listen about it. But, the piece about her filming for 6 months is pretty interesting. I guess we're not talking cameo here, are we?

Well, that's enough for today. The weather is much nicer this week, so get out and enjoy it while you can. Until next week, MIX well!