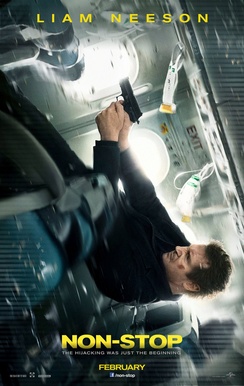 You knew it was only a matter of time.

Once you are an international action star, the whole "thriller on a plane" movie becomes a given. For Liam Neeson, he's battled terrorists in foreign lands, rabid wolves in the Alaskan wilderness and whatever the heck those things were in Battleship.

Life is good for Liam. Thanks to the unexpected success of Taken, the 61 years young actor has found a second life as the most improbable of all action stars. So, this day was inevitable.

Just as it was for those before him and Snakes on a Plane, Passenger 57, Con Air, Flightplan, Air Force One, Executive Decision and countless other airplane thrillers that escape me right now. Needless to say, if you're an action star, at some point you're going to be locked in a plane on a cross-Atlantic route with someone trying to kill you or all the passengers on board.

For Non-Stop it appears that they bringing all of the airplane clichÃ©s to bear. Check out the trailer below and let us know what you think.

Non-Stop is set to fly into theaters on February 28.