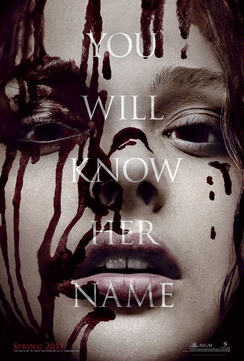 In case you were unaware, there's a remake of Carrie headed to theaters later this month. With Chloe Grace Moretz and Julianne Moore in the two key roles, it's certainly not lacking in the star power department, but will it deliver where it counts?

From trailers and other things that we've seen thus far, it would appear that they haven't gone too overboard with the CGI, instead opting to preserve the practical effects that made the original movie so iconic. I think that's a step in the right direction, but it's always tricky trying to update/remake a classic such as Carrie.

I will give them this though, they are trying. Below you'll find a little video that went viral this week as part of their marketing strategy. I just love looking at the freaked out faces of the unsuspecting customers. As a side note, what is a guy doing with a huge metal pipe in a coffee shop? We may never know.