New 'Machete Kills' red-band trailer lives up to its name 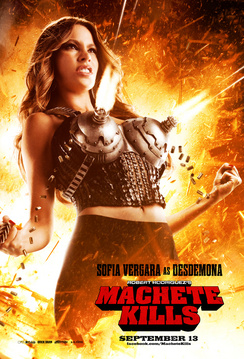 If you've seen Machete, or any of Robert Rodriguez's films really, then this trailer will not shock you. On the other hand, if the previous sentence sounds like gibberish to you, then you might want to pass on the trailer below.

Machete Kills is back with a new red-band trailer and this time it really focuses on bloody deaths and the female chest area. There's not one, but two deaths by helicopter disintegration.

As for the film itself, the trailer provides more of what we've come to expect from these films. I particularly enjoyed Charlie Sheen and Mel Gibson's performances. They both clearly get it and don't take themselves too seriously, which is sort of the point of these outlandish films.

Of course, at the center as always is Danny Trejo who truly carries the film and the budding franchise. Trejo has been in a ridiculous amount of films lately and yet, it doesn't quite feel like the supersaturation that you feel with someone like Eric Roberts (hmm, that actually sounds like a good little story on its own, stay tuned).

Back on track, the trailer ends with a nice little gathering of the voluptuous women that star in the film. And oh yeah, the lady on the far right is none other than Alexa Vega, the young girl from the Spy Kids franchise. I bet you feel old now, eh?

Machete Kills will be slicing and dicing in theaters on October 11.