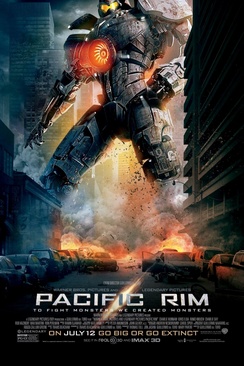 It's mid-July and save for one or two late positioned films, all of the big summer blockbusters have been released into the wild. August is usually a time for reflection on the summer that was and a bit of a breather period until Awards Season kicks off at the end of the year.

If you think writing these intros are tough now, just give it a month. Maybe Gavin will come early and save me the pain and suffering.

But the reality is that we are still here and we have to talk about this weekend. It was a three-way race that broke late, but we might not get a real feel for the week that was until they release the actual numbers tomorrow.

Until then, we'll do the best we can with what we have. Unfortunately, that's bad news for Warner Bros. as Pacific Rim failed to live up to lofty expectations. It would require Herculean efforts to overcome their Sunday estimates. We're talking about dead people voting in Chicago elections sort of efforts.

Sit back and enjoy today's MMM.

This pretty much sums what I know about Pacific Rim. Some Godzilla-esque super monsters rise up from the deep and we create huge Transformer like machines that are controlled by humans like the robot fighters in Real Steel.

And they say that creativity is dead in Hollywood.

Beyond this oversimplification, I do know that geek-cred director Guillermo del Toro oversaw the project and there was incredible Internet buzz about the film. Just like its long-lost relative Sharknado, it seems that Pacific Rim's Internet buzz was more bark than bite though as estimates put the film's weekend total at a subpar $38.3 million.

While that number is a personal live-action best for del Toro, I know that WB was hoping for something closer to double that number for opening weekend. With a budget over $200, it could have been worse. Early projections had the film bombing completely with a weekend gross under $30 million.

It should still limp to about $150 million before it's all said and done, so I'm not too concerned about its future. Combined with the overseas numbers which are bound to be better as Kaiju and mecha films play better in these venues and home entertainment figures, I'm sure WB will still turn a nice little profit.

Speaking of little, those Minions continue to tear up the box office with a second weekend on top of the box office. While technically it's a photo finish between Despicable Me 2 and Grown Ups 2 for the top spot, I think (hope) that we are safe in naming the animated sequel as the week's top movie.

If you compare the weekend numbers between Despicable Me 2 and Monsters University, you'll see that they are practically mirror images of each other. The difference between the two films is the holiday head start that Despicable Me 2 enjoyed. That $60 million will most likely translate into the final difference between these two films when it's all said and done. As it stands right now, Monsters University will end up just shy of $300 million at about $290 million while Despicable Me 2 will push to reach $350 million.

The other big opener this weekend was the Adam Sandler sequel Grown Ups 2. I didn't understand the fascination of the first film and I'm still left wondering why people actually go out and watch these films. Nonetheless, the sequel performed right in line with expectations, taking in $42.5 million.

Well, there isn't really much to report on from this weekend. It was rather slow in terms of Hollywood. It seems that the real news makers were elsewhere and since they don't really have anything to do with movies or Hollywood, I'm going to be remain blissfully unaware.

One thing that did catch my eye was a picture that Chris Pratt circulated via his Instagram account. Now, I'm late to the Chris Pratt party. I first noticed him by accident in The Five-Year Engagement and I was blown away by his performance.

Now, I had heard that he got all buff for Zero Dark Thirty, but I haven't seen that film yet. There's buff and then there's RIPPED. Pratt is undergoing the somewhat radical body change for the lead role in Marvel's upcoming Guardians of the Galaxy.

Finally, it's always a sad note when we have to report on an untimely passing. As much fun as Tim and I like to poke at Glee, we tend to subscribe to a live and let live ideology with the successful, but a bit annoying TV series. Glee star Cory Monteith passed away on Saturday night at the way too early age of 31. I'm not sure if he was still on the TV series or not, but his first starring film, Sisters & Brothers, is scheduled to be released direct-to-video on September 10.

On that somber note, we'll end the article. This week marks Comic Con in San Diego and while we aren't going to be there on the ground reporting, we'll be sure to keep everyone updated as events and news trickle out. Mix well friends.