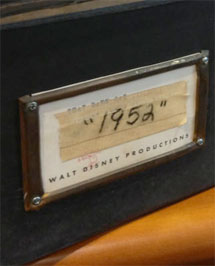 When it comes to mysteries, Damon Lindelof is no stranger to them and takes pleasure, at times, in messing with our heads. Brad Bird is more of a straight shooter, working most of his life in the animated realm.

So, when it was announced that the man behind Lost would be teaming with the guy who spearheaded The Incredibles, you know that we were intrigued. Actually, intrigued doesn't even begin to describe it.

Lindelof is known for his work in Science Fiction and misdirection and secrets and Bird is coming off his first live-action directing gig, Mission: Impossible - Ghost Protocol. Considering that the latter was produced by J.J. Abrams who just so happened to create Lost, well, you start to connect the dots a little.

The mysterious project that Brad Bird and Damon Lindelof found themselves thrown together on was at the time simply known as 1952 and that it was a "tent-pole" title for Disney. Immediately, speculation started to circle about aliens and the 1952 UFO incident over Washington D.C..

Soon thereafter, they announced that George Clooney had been cast in the lead and the name had changed to the more Disney-centric Tomorrowland. As I'm sure you know, Tomorrowland refers to one of the theme lands at the Disney amusement parks. While each of the incarnations of Tomorrowland is different, they all depict different visions of the future.

Speculation ramped up and it was soon almost a given that Tomorrowland was dealing with aliens. That prompted Lindelof himself to tweet out the following.

Hmm. So, the King of misdirection felt the need to clear up our misinformation? That seems rather counter-intuitive. I mean, if you want the true details of your film to remain secret and it's truly not about aliens, wouldn't you invite everyone to speculate that it is, in fact, about aliens?

I would think so. Unless, of course, the film really is about aliens.

But, that's not even the most bizarre thing to happen yet.

Nope, that would probably be this.

Lindelof and Bird decided to team up to tweet out two images that immediately launched a thousand (probably more) inquisitive minds.

No, really. They dissected every little scrap of contents in that box. What I find fascinating though is that link I just included is from D23, the official Disney Fan Club, who turned to Walt Disney Archives Director Becky Cline to help them decipher the contents.

What I find interesting is under number 4 when Cline states.

On the top there are some old photos. The three that I can see are of Walt with visitors, probably taken here at the studio. The one on top is in our photo collection and I was able to identify the man with him as Major Woodlief of the U.S. Army Reserve General Fund. It was taken in September 1943. The Disney Studio worked closely with the United States government and military soon after the bombing of Pearl Harbor on December 7, 1941, and U.S. Army, Navy and Air Force elements were stationed at the Lot for the duration of the war. I canât identify the people in the other photos, but we have the negatives for the photos in our collection. They were taken in 1950.

I added the bold text in there for emphasis because it just makes it easier when to go back and reference when I point out in a minute how that statement is either bold (no pun intended) face lie or conjecture on Ms. Cline's part. I certainly wouldn't put it past Lindelof and Bird to enlist Becky Cline in their little ruse.

First, let's take a look at an unobstructed, full-size view of the box. 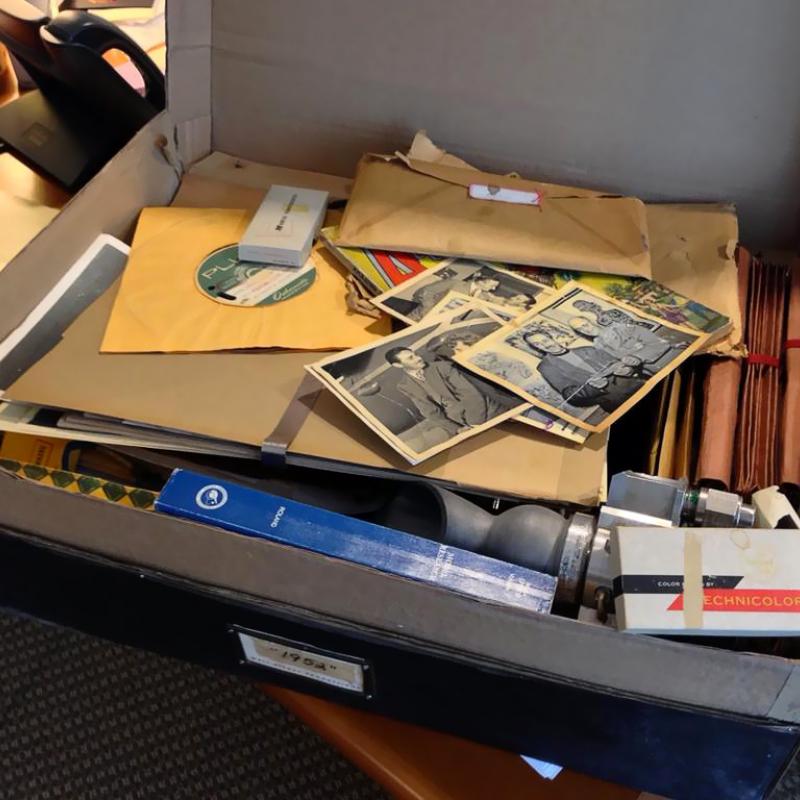 The second photo down appears to show Walt Disney and a young woman cavorting in front of an air plane. The young woman is none other than Amelia Earhart, but the picture was taken in 1934, not 1950.

You see, Amelia was a technical consultant on the 1935 film Wings in the Dark and she stopped by the set one day during filming and met the stars and posed for a couple of pictures. Like this one. 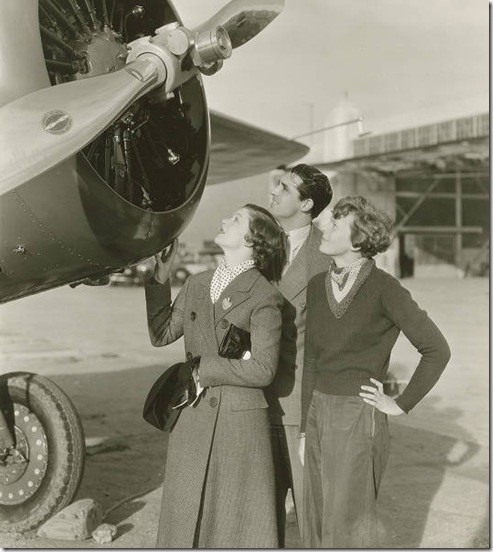 And, of course, this one. 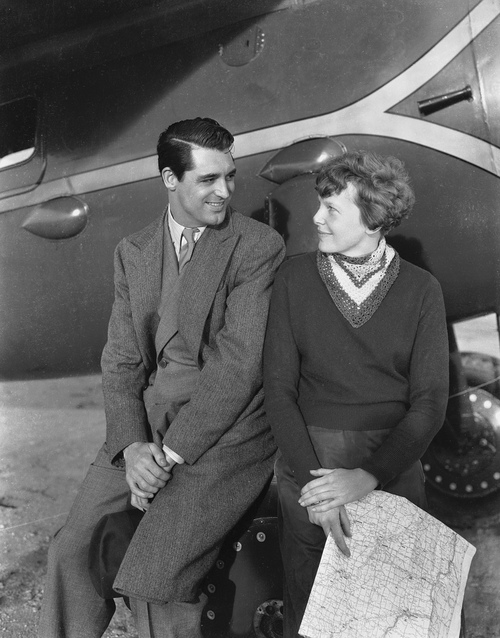 As you can plainly see, this is the same picture that was in the mysterious 1952 box with one ominous alteration. That's right, they have Photoshopped out Cary Grant and put Walt's picture up in his place. Why would they do that?

Wings in the Dark was a Paramount picture, so why would they have the negative in the Disney archives as Becky Cline states? Even more troubling, why go through the trouble of Photoshopping that picture if it's not important?

These questions become even more intriguing when taken in context with today's potential bombshell revelation over at HitFix. Drew McWeeny claims to have gotten his hands on the log line sent out by the producers of Tomorrowland to casting agencies in Hollywood.

This is the supposed storyline for Tomorrowland.

A teenage girl, a genius middle-aged man (who was kicked out of Tomorrowland) and a pre-pubescent girl robot attempt to get to and unravel what happened to Tomorrowland, which exists in an alternative dimension, in order to save Earth.

Drew then expounds upon this log line with three more paragraphs that basically fleshes out the entire story. You can read his assertions here. Of course, he doesn't state where he's pulling all of this character and plot information from.

Even more troubling, how does the mysterious box above play into this rather ho-hum plot? I mean honestly when I first heard it, my initial though was this was one of those corny Kurt Russell Disney flicks from the 1970s like The Computer Wore Tennis Shoes.

And maybe that's all this is, a simple misdirection all around. Of course, there has to be some truth in this somewhere. At some point, we will get answers, but until then we get to speculate and that's the best part.

What do you think?