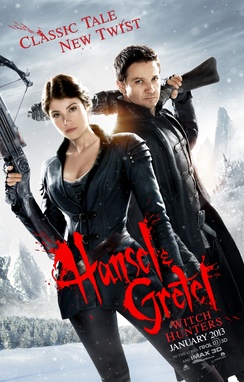 Does anyone really watch the Pro Bowl?

That question kept running through my mind last night as I was flipping stations (is this still a thing or am I just a dinosaur?) and landed on the game accidentally. To call it watchable would be generous, to call it anything resembling the NFL would be downright sacrilege.

So too, would it be sacrilege to call any of the movies released theatrically in January films, because they bear no resemblance to those cinematic masterpieces released during the other 11 months in the year. Sure, there are stinkers released during any given month or week in the calendar year, but the January "films" are a rare breed indeed.

So, it's not surprising that this is a slow weekend, but fear not. With the Oscars on the horizon, the outlook is promising. After the Oscars, Summer is just a stone's throw away and we all know what that means.

Seriously though, it's tough to write during the Winter blahs, especially when your non-existent expense account doesn't cover a trip to snowy Utah in mid-January. Sigh.

The aforementioned box office slump was very real this weekend as business was down 10% from last year. The top movie (only because it managed more money than the rest of the films) was Hansel & Gretel: Witch Hunters with $19 million.

The Jeremy Renner starrer has been the victim of shuffling release dates until it was finally set (dumped) in this late January slot. Of course, it did do more business in its first weekend than similar fare Abraham Lincoln: Vampire Hunter was able to scare up in its opening weekend in the midst of the hot Summer months.

Hansel & Gretel: Witch Hunters should end up in the $45-50 million range and with enough foreign receipts, you never know, there might even be a sequel. One film that will definitely not get a sequel is Movie 43.

The sketch comedy, ensemble flick opened way off the mark in 7th place with $5 million. While its anyone's guess as to what went wrong here, I think it's safe to assume that the unconventional film combined with its confusing marketing strategy is a good place to start.

It's not as though adult-targeted comedies can't work, quite the contrary, there's been a rash of recent successes, but you have to know what you're selling. I just got the feeling after seeing the TV commercials and trailers that they didn't know what to focus on.

Sure, it can be difficult with a sketch comedy to be able to create a coherent marketing plan, but it can be done.

The total was good enough for fifth place, but the film will struggle to make $25 million.

Oscars are Getting a 'Best Friend'

You know, I'll never understand the Academy of Motion Picture Arts and Sciences. After not having performances from last year's two nominated songs for Best Oscar for Best Original Song, it looks like they will have performances from this year's five nominees.

Well, it's an assumption that all five will be performed, what we do know for sure is that Norah Jones will be there to perform "Everybody Needs a Best Friend" from Ted. Interestingly, that film's writer and director Seth MacFarlane is hosting this year's Oscars telecast.

From the press release:

âEverybody Needs a Best Friend,â with music by Walter Murphy and lyrics by Seth MacFarlane, is nominated for an Original Song Oscar. This will be Jonesâs first time performing on an Oscar show. "I had such a great time recording this song with Seth, and was thrilled to find out that it was nominated for an Oscar,â said Jones. âGetting to perform it at such a prestigious event, which my friend is hosting, is a once in a lifetime opportunity."

"We are happy to have Norah Jones perform Seth's and Walter Murphy's nominated song on our Oscar telecast," said producers Zadan and Meron. "We are big admirers of Norah's singing and she will help celebrate the unique circumstance of having an Oscar host who is also nominated for Best Original Song."

We've known for awhile that X-Men: Days of Future Past will be a film that will attempt to bridge the world of the original trilogy of X-Men films with the cast of X-Men: First Class. Well, the connection got strong over the weekend when director Bryan Singer tweeted out the following message.

The Ellen Page news is huge given that Kitty Pryde is supposed to be a central figure in the film and Ellen's career has hit the stratosphere since she appeared in X-Men: The Last Stand.

After word broke late last week that Jar Jar Abrams (I'm lobbying for him to change it legally) will be bringing his trademark lens flares to a galaxy far, far away, the Internet exploded. It seems that lines were drawn (well, re-drawn) between the Star Wars fans and the Trekkies and Abrams will spend the next few years a man with split allegiances.

Since we last spoke, LucasFilm made it official and there's been rumblings that Episode VII might be pushed back from 2015.

This is what we do know.

Abrams is contractually obligated to Paramount for a third Star Trek (in the very least as a producer) and a fifth Mission: Impossible film amongst his many TV commitments and last week's news that Bad Robot had snagged the rights to a Lance Armstrong biopic.

In other words, J.J. is a busy man and that might affect the timetable for Star Wars: Episode VII's release. It seems that Kathleen Kennedy put the full-court press on Abrams after he initially balked at taking over the Star Wars reins, so I would imagine that LucasFilm will capitulate to make Abrams happy.

And besides, as fans, we just want the best possible movies. Looking over Disney's slate of 2015 releases, it would make some sense for the company to move Episode VII into 2016.

I think that's all the news fit for the mixer this morning. I hope you enjoyed it. Until next week, mix well!