Three score and one day ago, Hollywood unleashed upon this country a tremendous film about a legendary figure in American politics. Sometime last Summer, Oscars host Seth MacFarlane unleashed a film about a uncouth cursing teddy bear.

Shockingly enough, they are both going to the Oscars.

Lincoln's path to Oscar glory was assured and the historical drama did not disappoint while snagging the most nominations with 12. As host, Seth MacFarlane's ticket to the Oscars was also assured, but now he'll join recent host James Franco in having the distinction of being host and nominee in the same night.

In perhaps the most shocking twist of the early morning (or late night as Ted would argue), 'Everybody Needs a Best Friend' by Seth MacFarlane and Walter Murphy from Ted secured a nomination in the Best Original Song category. Before you get your hopes up with the potential of a filthy cameo from Ted on Oscars night, last year they didn't perform the Best Original Song nominees during the telecast.

Besides, the song is actually sung by Norah Jones and is quite fetching, although I would still consider it a huge underdog in a category that features both Adele and a new Les Mis song. Either way, check it out below and decide for yourself if it's Oscar worthy.

Lincoln looks poised to have a good night with its 12 nominations. I think Daniel Day-Lewis is a virtual lock for Best Actor and I'd put even money on Sally Field against Anne Hathaway in the Best Supporting Actress category.

Steven Spielberg should secure his third Best Director Oscar this year after Ben Affleck's snub for Argo. I wasn't sure if Affleck could actually win, but his presence in the category would have certainly garnered interest from the younger members as well as provide a rallying cry for those who oppose Spielberg. Now, I'm pretty sure that Spielberg will win this award in a landslide.

The Best Actress category provides for a bunch of interesting story lines. Nine-year-old Quvenzhane Wallis is the youngest nominee ever, while actress Emmanuelle Riva is the oldest. Riva will celebrate her 86th birthday on the night that the Oscars are handed out, talk about the greatest birthday present ever.

Unfortunately, history will most likely not be made as the Best Actress Oscar should come down to either Jessica Chastain for Zero Dark Thirty or Jennifer Lawrence for Silver Linings Playbook. But, crazier things have happened.

The second biggest surprise of the morning was the strong performance of indie film Beasts of the Southern Wild which scored four huge nominations including Best Picture and Best Director for newcomer Benh Zeitlin. Zeitlin scored a double nomination by also getting a nod in the Best Adapted Screenplay category. If Beasts of the Southern Wild is going to get an Oscar win, this is the category where I see it capable of pulling a mild upset.

The visually stunning Life of Pi got the second most nominations with 11, but it may end up going home with the most Oscars as it could sweep the lesser categories such as Sound Editing, Sound Mixing and the like. I don't really see Life of Pi making a big splash in the major categories, but the math geek inside me would love to somehow see it win 3.14159265359... Oscars.

The biggest snubs came in the Best Director category where (along with Affleck's snub) both Quentin Tarantino and previous Best Director winner Kathryn Bigelow for Django Unchained and Zero Dark Thirty respectively failed to get a nomination. They were considered worthy recipients and all three of their films took home a Best Picture nomination. 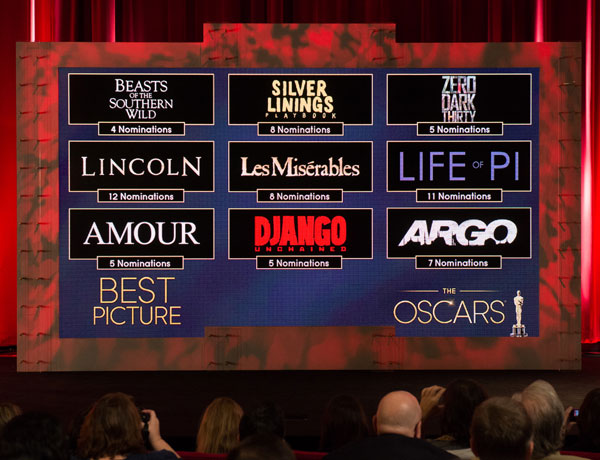