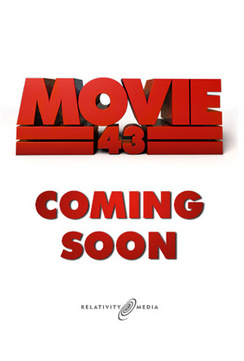 I know that I'm going to lose some of you here, especially the younger ones.

Amazon Women on the Moon.

If you were drawing the lineage of Movie 43, this would be a pretty accurate list. Throw in a pinch of Trey Parker and Matt Stone and you will have a close facsimile of Movie 43.

For the uninitiated, Movie 43 is a sketch comedy film that straddles the line of good taste and offensive comedy. This film is not for the weak-willed.

It features a star-studded cast including Halle Berry, Kate Bosworth, Liev Schreiber, Seann William Scott, Jason Sudeikis, Uma Thurman, Emma Stone and Gerard Butler as a leprechaun among many, many others. Many of the stars also pull double duty in directing their vignettes as well, so it promises to be an interesting film, to say the least.

If you are easily offended, turn back now. Don't say that I didn't warn you.

Good, now that it's just us, I have to admit, I was unsure how this film would turn out. You see, it's extremely difficult to pull off a great sketch comedy.

That's why you can count the great ones on one hand. Movie 43 looks to have all the earmarks of a great sketch comedy.

The red-band trailer is below. Again, I can't stress enough that it's quite deserving of its red band. Movie 43 is set to hit theaters on January 25, 2013.

* Even the most avid sketch comedy fan probably hasn't heard of Big Helium Dog, unless you are also a massive Kevin Smith fan. It's a great film from Smith buddy Brian Lynch, who has since made quite a name for himself writing animated films such as Hop, Puss in Boots and the upcoming Minions movie. I had the good fortune of seeing it at one of Kevin Smith's early Vulgarthons and I can't recommend it highly enough if you get the chance to see it.