Drop your hockey gloves and play the 'Goon' video game 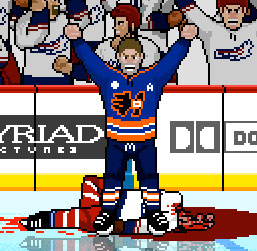 Unlike my cohort John, I've only had a passing interest in the sport of hockey. But that's never stopped me from digging some hockey video game action. While NHL '95 for the Sega Genesis may be my all-time favorite, the new hockey-themed game created for upcoming film Goon is quickly rising in the ranks.

The Goon game itself plays a classic 16-bit video game. It features (arguably) the most entertaining part of the hockey -- the part without any gloves, sticks or pucks involved. Yes, the fighting.

Appropriately, that's what the movie Goon is about too. It's a comedy starring Seann William Scott, Liev Schreiber and Jay Baruchel. Scott plays Doug Glatt, a dense guy drafted by his local semi-pro hockey team. Not for his puck handling ability but for his ability to land a punch.

The video game has you in the role of Doug Glatt as you fight your way through increasingly tougher opponents. The game has some crazy Mortal Kombat-esque fighting aspects which make it even that more awesome. However, I've yet to effectively pull off the key combos to perform the powerful tricks. In fact, I've yet to make it past Rhea, Glatt's final adversary as played by Schreiber in the film.

Check out the game trailer below and then head over to Goonthegame.com to play it for yourself. There's a lot of digital blood involved, so be forewarned.

Goon will be in theaters on March 9 and then hit DVD/Blu-ray on May 29. 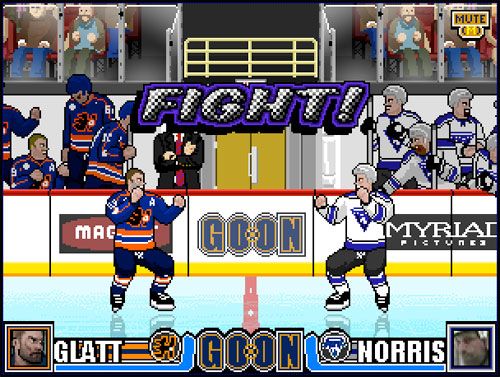